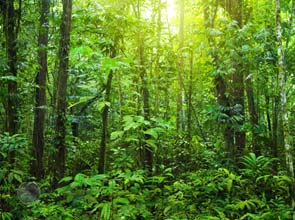 The deal allows the tribes in Sarawak state on the island of Borneo to earn a share of the proceeds from the sale of carbon offsets to help them manage and protect the forest over a period of 20 years, payments potentially worth millions of dollars.

Forests soak up large amounts of carbon dioxide, the main greenhouse gas blamed for global warming, and preserving the remaining tropical forests in developing countries is seen as a key part of the fight against climate change.

The project aims to improve the livelihoods of at least 10,000 people in 24 villages and is part of a United Nation-backed scheme called reduced emissions from deforestation and degradation (REDD).

The United Nations hopes REDD will lead to a multibillion dollar trade in forest carbon credits and the Malaysian project is one of several pioneering investments aimed at building up the REDD sector.

REDD seeks to reward developing nations and indigenous forest owners with carbon credit payments to save their forests. There are about a dozen REDD projects in neighboring Indonesia. The firm, Shift2Neutral, said it will work with the tribes and a local nongovernment organization to help manage the forest, survey the area and access the carbon stored in the trees and soil. The project would be certified under an enhanced form of REDD that also aims to reward any enhancement to a forest’s carbon stock.

A long-term management plan would also be created and a committee of comprising tribal leaders, investors and local and company officials would guide how the money is spent with the aim of improving livelihoods and curbing incentives for logging.

«It’s a 50-50 deal. We ensure they get their funding and they use that funding as per an economic development committee that is established,» said Brett Goldsworthy, chairman of Shift2Neutral, adding the aim was to make sure the money wasn’t squandered.

«You’ve got tribal people who have barely got any money and they are desperate for money for things like medical aid,» Mr. Goldsworthy said on Friday.

«What we will do with our funding is to start instigating other programs along the lines of medical, food aid, schooling, clothing to make sure there is a sustainable future,» he said.

Besides boosting incomes, better monitoring of the forest was also crucial.

«The main threat they face is illegal loggers,» he said.

«It is key to get more forestry people involved for the protection of the forest and having checks and measures on their boundary borders to ensure that people aren’t getting through.»

Mr. Goldsworthy said he hoped the carbon survey and management plan for the area would be finished by next year, followed by the issuance of the first batch of carbon offsets called V.E.R.’s, or voluntary emissions reductions, to be sold to investors.

It was too early to provide an accurate estimate of the number of V.E.R.’s per hectare from the Sarawak site, he said.

«As the land is first-growth vegetation one could expect 50 per hectare but again we have not provided anything at this point.»

Avoided deforestation V.E.R.’s fetch anything from $10 to $30 each depending on the project, country and risk.

He said the company is developing similar projects in the Philippines, Indonesia and South Africa with V.E.R. buyers being governments, large corporations and wealthy individuals.