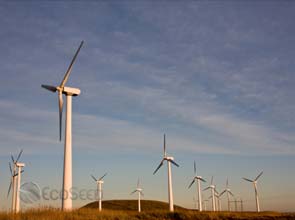 Wind energy was the leading renewable electricity generation technology for the second consecutive year, responsible for 10.2 GW, or 38 percent, of the 27.5 GW of total new energy capacity built last year.

In its report entitled Renewable Energy Snapshots 2010, the research center said wind energy posted more than 74 GW of cumulative installed capacity in 2009, exceeding the 40 GW target by more than 80 percent.

The European Wind Association already set a new target of 230 GW of installed wind capacity by 2020, of which 40 GW will come from offshore wind, to supply about 20 percent of Europe’s electricity demand.

Meanwhile, solar photovoltaic electricity generation’s cumulative installed capacity went up by more than 50 percent to 16 GW in 2009. Europe expects to see further growth in this industry with upcoming 10 GW of installations this year.

However, concentrated solar power growth remained relatively small, with only 0.43 GW of installed capacity as of May 2010, which accounted for 0.5 percent of Europe’s total capacity.

But an estimated 30 GW worth of concentrating solar power projects would be installed by 2020 if the European Solar Industry Initiative is carried out. Currently, most projects under construction are located in Spain.

As for biomass energy, the research center expects its output to reach 200 terrawatt-hours this year, from 108 TWh in 2008, if present growth is maintained. Competition for other biomass uses, such as for heat and transportation, can potentially hinder bioelectricity development, but the use of biomass as an electricity source increases due to its ability to be stored for use in peak hours.

The research center did not include other emerging renewable sources, such as geothermal and tidal and wave power, in the report, reasoning that these are still at the research and development stage. However, it anticipates these sources to penetrate the market within the next decade.

On the contrary, the report states that hydropower generation will not experience any major progress this year because most of Europe’s hydro resources are already being exploited.

If the current growth rates are maintained, sources can generate up to 1,400 TWh of electricity by 2020, the report predicts. This will not only sustain 35 percent to 40 percent of Europe’s overall electricity consumption, but will also contribute significantly to the European Union’s goal of 20 percent renewable energy generation.

The report recommends resolving some issues first in order to meet the targets, such as ensuring fair access to grids, substantial public research and development support and adaptation of current power grids to accommodate renewable energy.