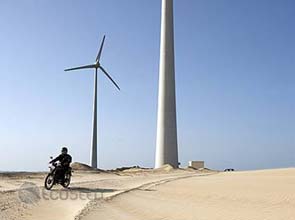 The global wind energy sector has a number of bright spots this 2011, with several regions showing some signs of activity amid an investment environment whose growth largely depends on what the United States and China will do.

In an interview with EcoSeed, Angelika Pullen, communications director of Global Wind Energy Council, said such areas as China, Europe and even several developing regions, is worth watching this year.

China recently published a five-year plan that is huge in terms of expanding wind energy – about 130 gigawatts once completed, said Ms. Pullen.

Ms. Pullen said Europe’s continuous investment in offshore wind will contribute to global capacity expansion thanks to its stable market, whose movement is almost always predictable every year.

But in April last year, the council said Europe will have the world’s largest wind energy capacity only until 2013, after which Asia will overtake it with 148.8 GW over Europe’s 136.5 GW in 2014.

Southeast Asian countries like Vietnam and the Philippines have showed interest in wind energy, Ms. Pullen said, but the problem is that the countries’ policies have yet to be defined.

Latin America has an emerging wind energy market to watch for, Ms. Pullen said. Brazil has clean energy plans underway that, if things go according to plan, will reach 1 gigawatt. Of this, the country plans to build wind energy plants of about 45,000 MW.

With a booming economy that was hardly affected by the global crisis, Brazil can be a huge powerhouse for the rest of South America.

“Argentina has fantastic wind and shows signs of being exploited,” she said.

She concluded that developments are being seen in Africa, with a steady growth of investment in the north.

But the global wind energy market will only slightly grow this year compared with last year, and market activity will depend mostly on the next leading wind giants, China and the United States.

Wind investments were up about 30 percent in 2010, and over 40 gigawatts of wind capacity was added. Exact figures are yet to be released.

Among these is about $1.7 billion financing package for the 295-MW Thornton Bank wind farm in Belgium and a $1 billion funding for Germany’s Borkum West II offshore development.

But uncertain federal policy in the United States could hamper growth plans in 2011.