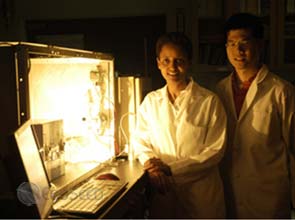 Scientists at the California Institute of Technology developed a new reactor that can catch solar energy and use it as a catalyst to efficiently convert carbon dioxide and water into sustainable fuels.

Sossina Haile, a professor of materials science and chemical engineering, headed a team of scientists in developing a two-foot-tall prototype solar reactor fitted with a quartz window and a hollow center that absorbs concentrated sunlight.

Essentially, the concentrator works similar to a magnifying glass that focuses the sun’s rays and uses it to heat the center of the device. The hollow cylindrical center of the reactor is lined with ceria, a metal oxide commonly found in the walls of self-cleaning ovens.

Ceria has the natural capability to emitting oxygen from its crystalline framework when subjected to very high temperatures and absorbing oxygen when in lower temperatures. This ability is key to the reaction taking place within the solar reactor.

When ceria absorbs oxygen, the oxygen is stripped of its carbon dioxide or water gas molecules. The carbon and water are pumped into the solar reactor to create carbon monoxide and hydrogen gas.

Hydrogen gas can be used as a fuel for hydrogen fuel cells, while the combination of carbon monoxide and hydrogen can be used to create synthetic gas, a chemical foundation for liquid hydrocarbon fuels. Additionally, infusing other catalysts into the gas mixture can produce methane.

«What is special about the material is that it doesn’t release all of the oxygen. That helps to leave the framework of the material intact as oxygen leaves,» explained Ms. Haile.

«When we cool it back down, the material’s thermodynamically preferred state is to pull oxygen back into the structure,» she added.

To initiate the process, temperatures inside the reactor must reach nearly 3,000oFahrenheit. Ms. Haile and her colleagues successfully subjected the reactor to such temperatures by using electrical furnaces at the institute. They also installed the reactor on a large solar simulator at the Paul Scherrer Institute’s High-Flux Solar Simulator in Switzerland for a real world test.

The experiments using the reactor reportedly produced the best rates for breaking down carbon dioxide. The reactor has an unusually high efficiency in splitting carbon dioxide due to its use of the whole solar spectrum and not just specific wavelengths.

Currently, though, the system only harvests less than 1 percent of the solar energy it collects. Most of the energy is lost as heat through the reactor’s walls or re-radiation through the quartz window.

The researchers plan to modify the ceria formulation to lower the reactor’s operating temperature. They will also redesign the reactor to improve its efficiency. Calculations indicate that the reactor has the potential to achieve efficiencies of 15 percent or higher.

Ideally, the process can be used in large-scale energy plants to enable support from solar derived power. The carbon dioxide released by vehicles could also be collected and converted into fuel.

However, Ms. Haile believes that this would be difficult. A more realistic application is to take carbon dioxide emissions from coal-fired plants and turn them into transportation fuels.

Meanwhile, the reactor can be used in a zero-carbon dioxide emissions cycle. In such a cycle, water and carbon dioxide would be converted into methane to power electric-producing facilities that generate more carbon dioxide and water, maintaining a repetitive process.