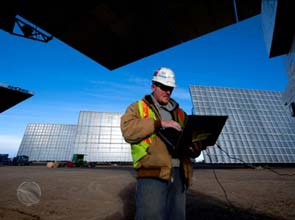 The Amonix 7700 Concentrated Photovoltaic Solar Power Generator uses highly efficient multi-junction photovoltaic cells originally developed by N.R.E.L. scientists. The cells are made of gallium indium arsenide and gallium phosphide in lieu of the traditional silicon and were able to convert 41.6 percent of the sunlight they absorbed into electricity in a laboratory setting.

Though production cells typically never work as well as cells in the lab, the cells produced for the Amonix 7700 have been found to be capable of achieving 31 percent efficiency at the module level and 26 percent at the system level in the field.

According to N.R.E.L., the 31 and 26 percent efficiency rates are the highest ever achieved for operating CPV concentrators allowing the 7700 to deliver more “energy per acre” than anything yet available in the solar energy world.

The 7700 uses acrylic Fresnel lenses to concentrate sunlight up to 500 times its usual intensity and direct it onto 7,560 of the multi-junction PV cells. While a six-inch square silicon wafer used in traditional panels produces about 2.5 watts of electricity, the same sized wafer cut into hundreds of cells in the 7700 teamed with the lens produces more than 1,500 watts. This reduces the required area for cells 500 times.

Twenty units of the Amonix 7700 can fit on just five acres of land and are capable of generating more than a megawatt of rated capacity or more than enough to power 750 homes.

One 53-kilowatt 7700 system has a two-axis tracker that can be repositioned during the day to follow the sun as well as be re-positioned to shield the cells from extreme wind. The energy needed to move the tracker amounts to less than 1 percent of the systems power output.

The 7700 also integrates the lenses, the cells, and the mounting structure into a single unit which helps keep down costs. It is easy to transport and quick to assemble.

Amonix has 15 years of experience developing CPV systems, while N.R.E.L. has a record of more than three decades of research and development in PV technologies. The partnership, incorporating the high-efficiency multi-junction solar cell with Amonix’s CPV system, came about through the High-Performance PV Project funded by the DOE’s Solar Energy Technologies Program.