Gamesa signs a total of 600-MW agreements with Chinese partners 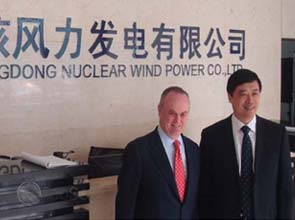 China Huadian will be located in the Inner Mongolia Autonomous Region. Gamesa will provide both projects with wind turbines during the next five years.

Both projects will make use of a versatile wind turbine, the G9X-2.0 MW unit that has four different rotor sizes – 80, 87, 90, and 97 meters. These wind turbines to be delivered will be made in two manufacturing plants of Gamesa which incidentally are in the same location of the projects – Jilin and Inner Mongolia.

With these two wind farm contracts, Gamesa’s cooperation agreements in China have reached a total of 2,726 MW of wind energy.

China Huadian New Energy Development Co., Ltd. was founded on September 26, 2007 and is the whole owned subsidiary of China Huadian Group. The company is mainly focused on new energy projects, which include the investment, construction, production, and power sales of wind, small hydro, solar, biomass, geothermal, and tidal energies.