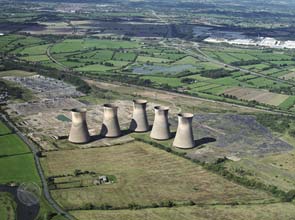 Britain approved the construction of RWE Npower’s 2.4-gigawatt combined cycle gas turbine plant that the utility said will be carbon capture and storage-ready.

Combined cycle power plants reuse the exhaust heat otherwise released as waste so that more energy is produced out of a power plant’s operations, thereby making it more efficient.

The gas plant will be built on the site of the former Willington A and B power stations which were closed in the 1990s, at Willington in South Derbyshire in England.

Britain emitted over 112.71 million metric tons of carbon dioxide from the consumption of coal in 2009.

Charles Hendry, minister of state for the Energy and Climate Change Department and who announced the approval, said the gas-powered plant will be built in a way that prepares it for carbon capture and storage capability.

“The Willington plant will play an important role in providing secure electricity supplies to millions of homes, as well as bringing jobs and investment to South Derbyshire,” Mr. Hendry said.

Proposals for a new gas pipeline for the power plant will be submitted to the government’s planning committee within the year.

Until then, RWE Npower is not finalizing its investment plans, said the company’s chief technical officer Kevin McCullough.

The combined cycle plant is expected to create 100 regular jobs and an annual income of £10 million.

RWE Npower is a British energy utility, one of Europe’s largest companies, producing over 10 percent of electricity used in England and Wales.