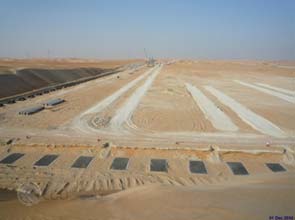 Shams 1, a $600 million concentrated solar power project in the Middle East, found funding from 10 banks, giving Abu Dhabi a much needed push to reach its renewable power generation target of seven percent by 2020.

The project is a joint venture of Abu Dhabi Future Energy Company (Masdar), a government initiative for the commercialization and deployment of renewable and alternative energy technologies; Total Gas and Power, a major oil and gas group and Abengoa, an international company that centers on sustainable development in energy and environment sectors.

The three companies will hold percentages of 60, 20, and 20 in shares, respectively in the project which will be developed under a 25-year build, own, and operate basis.

“With this financial close, we are going one step forward toward the completion of the Middle East’s largest solar power plant,” said Total president Philippe Boisseau.

Having piqued the interest of the lenders, financing was oversubscribed with commitments totaling more than $900 million. The deal made is non-recourse and will follow a 22-year door-to-door fully amortizing structure.

“The dynamic deal team was able to leverage knowledge across the sponsor group resulting in an innovative structuring and a ground-breaking financing for a landmark deal,” said Derek Rozycki, executive director of structured finance and capital markets at Mubadala, Masdar’s parent company.

The project is a 100-megawatt concentrating solar power plant in Mdainat Zayed, western Abu Dhabi. The country believes that the solar project will spearhead their goal of seven percent renewable energy production by 2020. Completion of the plant is projected to be in December 2012.

The plant will be built on a 2.5 square-kilometer area which they intend to extend to 6.5 square kilometers. The companies plan to increase the plant’s capacity to 2,000 MW in the future.

The whole solar plant will employ 768 parabolic trough collectors and will utilize Abengoa’s solar technology. The technology will focus the sunlight through the use of mirrors thereby heating a coolant, which will then generate high-pressure steam that will drive a conventional steam turbine.