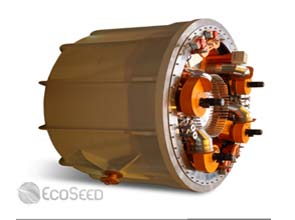 The acquisition will help it diversify its customer base and reach $1 billion in annual revenues using Switch’s proprietary permanent magnet generators and power converters for renewable energy sources, the company said in a statement.

“In today’s market, there is a great demand for multi-megawatt turbines utilizing advanced power electronics and permanent magnet generators – a trend that A.M.S.C. and The Switch can take advantage of,” said Jukka-Pekka Mäkinen, president of Switch.

The combined company will be serving China’s three largest wind turbine manufacturers including Sinovel, Goldwind, and Dongfang. Overall, A.M.S.C. serves six customers in China by granting them licenses to manufacture its Windtec wind turbines and supplying them electrical components.

The takeover will also strengthen A.M.S.C.’s presence in Western wind markets with customers such as General Electric, who has been keen in using permanent magnets to power its controversial direct drive wind turbines.

A.M.S.C. will pay about $186 million in cash while the rest will be paid in stock, following the average share price prior to the closing of the deal by August 31. The company said it will use its existing cash balance to finance the deal.

The Switch, founded in 1996, is composed of three companies — Rotatek Finland, Verteco and Youtility and initially focused on manufacturing electrical power conversion systems for renewable energy. In 2010, it had revenues of $179 million and roughly $16 million in net income, or $0.33 per diluted share.

Permanent magnet generators have the ability to harness low to moderate wind speeds and compatibility with both gear-driven and newer gearless turbine designs. However, they use neodymium, among other rare metals, that can only be found in abundance in countries like China, which hold roughly 90 percent of the world’s supply.

“We expect to achieve another record year of revenues and earnings in fiscal 2010 (ending in March),” said Greg Yurek, chief executive of A.M.S.C.

“However, A.M.S.C.’s organic revenues and earnings are expected to decline sequentially in the first quarter of fiscal year 2011.”

A.M.S.C. is expecting that its revenues will pick up after the acquisition closes by August, anticipating combined revenues to grow by 30 percent to 35 percent for full fiscal year 2011.