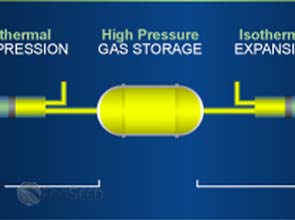 New-Hampshire startup SustainX has received $14.4 million from General Electric Energy Financial Services and several other investors to speed up the development of its technology that uses compressed air to store energy.

General Electric joins Cadent Energy Partners and prior investors Polaris Ventures and Rockport Capital in the new round of venture financing. However, other details were not disclosed.

Earlier financing of $5.4 million was provided by the Small Business Innovation Research program of the National Science Foundation and from the Energy Storage Program of the United States Department of Energy.

Energy storage devices are needed to smooth out the variations of renewable electricity, since renewable sources’ electrical output change throughout the day. Proponents of compressed air energy storage said their technology is cheaper than other energy storage options like batteries, which use toxic materials or scarce metals like lithium.

The SustainX’s technology uses excess energy from a power plant or renewable energy sources to run air compressors to pump air into tanks where it is then stored under pressure. The stored air can then be released as needed to power a turbine to generate electricity.

SustainX’s closest competitor is General Compression. Unlike SustainX, the company pumps compressed air in underground caverns for later use. The Massachusetts-based firm said its technology can respond in less than six seconds to back up renewable energy facilities like wind, which is the company’s main focus.

General Compression raised over $20.9 million in Series A financing in 2010. Investors include U.S. Renewables Group, Northwater Intellectual Property Fund, and Duke Energy – utilities with a lot of wind power to back up. General Compression has also been selected to receive up to $750,000 in the Department of Energy’s Advanced Research Projects Agency-Energy funding program last year.

The Iowa Association of Municipal Utilities and the Department of Energy also announced plans to integrate a 75 to 150 megawatt wind farm with a compressed air energy storage facility in January 2007. Currently being developed, the Iowa Stored Energy Park is expected to go online this year.

So far, there are only two such plants in operation in the world – the 290-MW plant belonging to E.N. Kraftwerk in Huntorf, Germany built in 1978 and a 110-MW plant of Alabama Electric Corporation in McIntosh in Alabama commissioned in 1991.