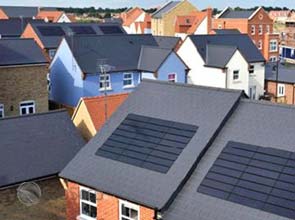 Britain’s Department of Energy and Climate Change outlined specific plans toward slashing its feed-in tariff rates for large solar photovoltaic energy projects by as much as 70 percent. On the other hand, the government is looking into increasing the incentive rates for anaerobic digestion facilities. Both plans, however, sparked strong response from Britain’s renewables sectors.

The current feed-in tariff rates for solar PV installations are 31.4 pence per kilowatt-hour for 10-kW to 100-kW systems and 29.3 pence/kWh for larger 100-kW to 5-megawatt systems. The department suggests cutting this to as low as 8.5 pence/kWh for 250-kW to 5-MW systems.

Rates given to solar projects rated between 150 kW to 250 kW could also be brought down to 15 pence/kWh, while projects generating 50 kW to 150 kW have been marked down to 19 pence/kWh.

Energy minister Gregory Barker said the proposals will stop larger-scale solar projects from «soaking up the cash» that otherwise should go to homeowners installing solar roofs. Large systems are also said to be competing with small scale hydropower and wind turbines.

«Our cash for green electricity scheme is a great way to reward homes, communities and small businesses that produce their own renewable power,” Mr. Barker said.

«I’m committed to an ambitious rollout of microgeneration technologies as part of the coalition’s green vision of a much more decentralized energy economy,” he added.

Energy Secretary Chris Huhne announced last month that the department would review feed-in tariff rates for large solar installations that are over 50 kW in size, as it feared a massive surge in the number of large-scale solar farms.

Mr. Huhne said the current tariff scheme lack measures to limit funding for large commercial solar projects which might end up eating the entire budget support in the program. He said industry projections indicate there could be many more such projects in the pipeline.

The department on Friday said there could already be 169 MW of large-scale solar capacity in the planning stage, which is equivalent to funding solar panels on the roofs of around 50,000 homes if current tariff rates are followed. An average household solar installation is around 2.5 kW.

Meanwhile, the current rates for anaerobic digestion are 11.5 pence/kWh for systems smaller than 500 kW and 9 pence/kWh for larger systems.

The department is seeking responses on the proposed tariff rates until May 6 and changes could take effect from Aug. 1 this year, subject to the outcome of the consultation and approval in Parliament.

The Renewable Energy Association, representing British renewable energy producers, said the government was making a “horrendous strategic mistake” with its plans to slash rates for solar.

“Larger PV projects are cheaper, and have a major role in driving down costs. We don’t want boom and bust in this sector either, but pulling the rug out from under the feet of those that have ventured into this market was precisely the wrong response,” said Gaynor Hartnell, the association’s chief executive.

“Britain will return to the solar slow-lane. It’s as good as a retrospective change and that does untold damage to investor confidence. It’s not acceptable and we will fight it,” Mr. Hartnell added.

Jeremy Leggett, executive chairman at Solarcentury, a contractor of large-scale, ground-mounted solar installations, went further, accusing the government of “betraying” the industry. Mr. Leggett said the plan was contrary to assurances given by ministers that feed-in tariff rates for small urban solar PV will remain untouched.

«The government has not only betrayed those assurances, but today proposes feed-in tariff rates that would ensure that Britain’s PV industry stalls,» Mr. Leggett said in a statement published in the Guardian.

“No renewables company or investor can easily trust this government again after this U-turn by ministers,” he added.

Mr. Leggett said more than 40 countries have chosen to build their renewable energy industries in Britain to avail its generous feed-in tariff rates.

As for the proposed feed-in tariff rate increase for anaerobic digesters, R.E.A. was left unimpressed, saying the government’s concern over energy crops is “totally misplaced.”

“We don’t anticipate much increase in uptake of small-scale anaerobic digesters, with these meager tariff increases. That’s a missed opportunity, as methane emissions from agriculture can be reduced by on-farm biogas plants,” the group said in a statement.

The R.E.A. said it will be working with Defra and the Energy Department over the coming months to build their confidence in the technology.

Anaerobic digesters are said to benefit waste management, agriculture, and land management. It uses microorganisms to break down biodegradable material in the absence of oxygen to produce methane for energy production.