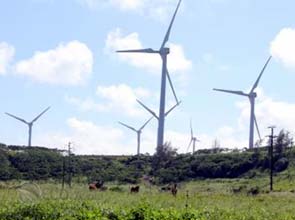 An island in Hawaii could receive as much as 25 percent of its energy from the Interisland Wind project which is projected to generate 400 megawatts of electricity, a renewable think tank showed.

The Oahu Wind Integration Study, which examines the grid and the transmission integration of renewables in Hawaii, showed in a recent report that the Interisland Wind project which will bring clean wind power from Molokai and Lanai to Oahu, could meet 25 percent of Oahu’s projected electricity demand.

The state of Hawaii will be developing the undersea cable system, while the Hawaiian Electric Company will upgrade the Oahu grid and operations system to accommodate the 400 MW of energy from both wind farms.

The wind project will help the state achieve its Hawaii Clean Energy Initiative goal of 70 percent of clean energy by 2030. The initiative is the state’s road map in becoming energy-independent.

In October 2009, Hawaii has issued a request for proposals for a company or organization to conduct an environmental impact statement for the project’s cable system. Construction of the cable system could start in three years after the E.I.S. and permitting are complete. Further information regarding the project’s operation date is not yet released.

In addition to calculating the percentage of renewable energy the project will bring, the study assessed the outcome of installing 500 MW of wind power and 100 MW of solar power in the region. Based on the study, 600 MW of clean power could eliminate the need to burn 2.8 million barrels of low sulfur fuel oil and 132,000 tons of coal yearly.

For full optimization and to yield the benefits of the said projections, the authors of the study recommended that the state institutionalize state regulations such as advanced wind power forecasting, increased power reserves to help manage wind uncertainty and implementation of severe weather monitoring to ensure adequate power generation during periods of strong winds.

“The findings of this study show it is feasible to integrate large-scale wind and solar projects on Oahu that also have value beyond Hawaii,” said Dr. Rick Rocheleau, director of the Hawaii Natural Energy Institute at the University of Hawaii at Manoa.

Dr. Rocheleau added that the study could act as a guide for both big mainland utilities and small or isolated grids that wish to integrate renewable energy while maintaining reliability.