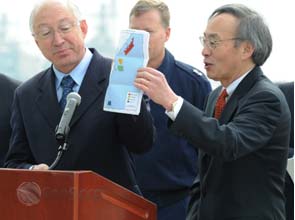 The United States Department of the Interior has awarded its first wind lease offer under the Atlantic Offshore Wind program in Delaware. Interior Secretary Ken Salazar said that under the “Smart from the Start” program, the department is beginning the process of offering the first commercial wind lease to wind energy company NRG Bluewater Wind Delaware LLC.

The department had precluded bidding procedures for the project due to lack of competitive interest for commercial wind energy development in that area of the Outer Continental Shelf.

“This is another major step forward in tapping the enormous offshore wind potential of the Atlantic coast,” he said.

“It’s encouraging to see the federal government putting some of its efforts into moving offshore wind energy forward,” he said. “The decision recognizes the longer-term economic and environmental benefits the NRG Bluewater Wind project could provide Delaware and that the offshore wind industry could provide the nation.”

For his part, Senator Chris Coons, Democrat representative of Delaware, said, “This is great news for Delaware and another sign that our state has the wind at its back in the development of clean, renewable energy. Delaware has been steadily charting a course for offshore wind development, and this announcement is another milestone in our progress towards a robust industry.”

“The NRG Bluewater Wind project is now on a clear path to move forward, and as a member of the Senate energy committee, I will continue to do everything possible to help bring clean power and its job opportunities to our state,” he added.

The Interior department’s Bureau of Ocean Energy Management, Regulation and Enforcement in April 2010 published a request of interest regarding wind energy development in waters offshore Delaware and received only one company’s response – that of Bluewater Wind’s.

The bureau made another R.F.I. in January that elicited no response from other wind energy developers, so the lease was awarded to Bluewater.

Mr. Salazar said that requirements of a lease would include environmental reviews, and consultation with other federal, state, local, and tribal organizations. Once it is issued, the developer will be required to submit a detailed construction and operation plan that will be subject to further environmental review and public comment, he added.

Under the “Smart from the Start” initiative, B.O.E.M.R.E. will work with state partners to identify wind energy areas off the coasts of a number of Atlantic states, including Maryland, Delaware, New Jersey, Virginia, Rhode Island, and Massachusetts.

This offshore wind initiative is the latest in a series of the Obama administration’s actions to spur renewable energy development on the Outer Continental Shelf. In early 2009, Mr. Salazar expedited the long-delayed process for approving the final rules for offshore wind development, establishing a regulatory framework that encourages responsible development.