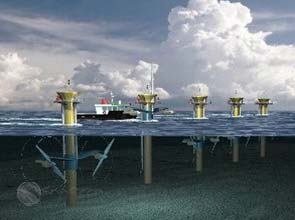 Under the proposal submitted by Sea Generation Wales Ltd. in March 25 to the Welsh Assembly Government, the country’s executive department, five 2 MW-rated SeaGen underwater turbines will be installed between the islands of the Skerries and Carmel Head in 2015. Sea Generation was set up by the two developers.

Marine Current said its SeaGen turbines are similar to an underwater windmill, with rotor blades driven by the power of the tidal currents rather than the wind breeze.

The venture might finance the project through a funding support it will get under Britain’s Marine Renewables Deployment Fund. The company’s 1.2-MW wave power facility in Strangford Narrows, Northern Ireland passed the fund’s stringent requirements last March 24. The facility had been using SeaGen systems since 2008.

But the company said the £42-million ($ 67.13 million) program fund is in danger of being stopped. A number of companies complained that its qualifying conditions have been too tough.

If it does get scrapped, Sea Generation might expect financial support from the forthcoming Low Carbon Innovation Fund or an equivalent government green technology funding scheme, according to a statement. Ministers are expected to unveil a new state “marine action plan” in May in an attempt to spur more projects.

Currently, the SeaGen turbines are the only tidal or wave energy device to qualify under the fund, while the Strangford facility is Britain’s first and only operational tidal power plant according to Ofgem.

Marine Current plans to assemble four tidal farms off the British coast by the end of the decade. The planned wave power projects include a 10-MW plant for Anglesey in North Wales which costs £70 million and a 5-MW plant in Kyle Rhea, what could be Scotland’s first wave energy installation, at £35 million. All of the facilities are planned to be installed by 2014 at the latest.

In March last year the company was approved for a lease from The Crown Estate to install a wave energy facility off Brough Ness, on the southernmost tip of the Orkney Islands. The company plans to have the project’s first phase deployed there by 2017 and complete the whole project by 2020.

The firm’s largest project to date could be a 100-MW wave facility announced in September last year to be built off Antrim in the Northern Ireland coast. The company intends to partner with ESB International and finish the project’s initial phase by 2018.

Marine Current was ranked in 2009 as the world’s top tidal energy company in The Guardian/Clean Tech Global 100 survey and won Renewable Energy Developer of the Year in Britain’s Renewable Energy Association Annual Awards.