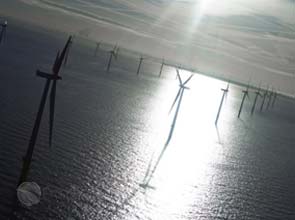 Danish pension groups PensionDanmark A.S. and PKA will acquire a 50 percent stake in a Danish offshore wind farm project that will to become the country’s largest.

PensionDanmark will acquire 30 percent in the project and PKA 20 percent according to project owner Dong Energy in a statement. The acquisition would cost about 6 billion kroner ($1.13 billion).

According to Dong Energy, the deal will happen in four stages beginning this year until the end of 2013. Throughout, 14 percent, 30 percent, 31 percent and 25 percent of the cost will be delivered.

Anholt, located off the island of Anholt in the Kattegat Strait, is projected to become Denmark’s largest offshore wind park with a capacity of 400 megawatts. The wind farm cost approximately 10 billion kroner when Dong won the contract in June 2010 following a Danish Energy Agency solicitation.

The wind farm must supply power by the end of 2012 and be commissioned by the end of 2013 at the latest, or suffer reduced tariff incomes and penalties. The agency said the project will get a feed-in tariff rate of 105.1 kroner per kilowatt-hour.

Anholt reportedly will use wind turbines from Siemens. It is expected to supply power for more than 400,000 Danish households, equivalent to about 4 percent of Denmark’s power consumption.

Both pension funds will take over the wind farm’s earnings in proportion to their respective stakes starting April 2014. Until then, the facility’s operations will be Dong Energy’s responsibility. Dong will handle maintenance work in a 15-year service deal.

Anholt marks the third wind farm in which Dong Energy attracted pension funds as equity investors. This is the second time PensionDanmark has done a deal with Dong Energy, having acquired a 50 percent stake in the 165-MW Nysted Havmollepark wind farm for 0.7 billion kroner in September last year.

Torben Möger Pedersen, chief executive of PensionDanmark, said his company is the first pension fund to enter into a direct agreement with a major Danish industrial partner in the sector.

“We believe that the model chosen can serve as a breakthrough for the investment of pension fund assets on a large scale in green technology and other infrastructure in Denmark,” he added.