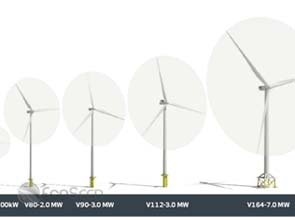 Ditlev Engel, chief executive of the Danish wind turbine maker, told the press during a conference for the unveiling in London on March 30 that the new turbine was the first that Vestas developed specifically for the offshore energy category.

It’s also a product of the company’s single largest research and development spending.

The wind turbine, named V164 7.0MW, has 80-meter-long blades – longer than nine London double-decker buses. With a rotor diameter of 164 meters, it can draw a circle bigger than the London Eye Ferris wheel, which has a diameter of 135 meters.

The turbines’ massive capacity was a surprise since it is 1 MW larger than anticipated, following a February announcement from Vestas which talked of a 6-MW design.

It is also 1 MW larger than the offshore turbines planned by rivals Siemens and General Electric.

Finn Strom Madsen, president of Vestas Technology R&D, said the company believed it could build a larger 7-MW model with the same risks of building a 6-MW unit and bring it to market following the timetable set for the latter.

Vestas will continue to use gearboxes for the 7-MW turbine rather than the emerging direct-drive technology.

Mr. Madsen explained that gearboxes are cheaper and less reliant on rare-earth metals, 90 percent of which are sourced outside, particularly China. The whole turbine is also said to be 80 percent recyclable.

Overall, the mammoth turbine has more than twice the capacity of the company’s standard 3-MW unit, but is smaller than the 10-MW wind turbine, the Britannia, being built by United States company Clipper, scheduled for deployment in Britain late this year, according to media statements.

Construction of the turbine’s first prototypes is scheduled to begin later next year. The facility will shift into mass production by the first quarter of 2015, provided that turbine orders justify the large cost of building manufacturing facilities that can accommodate the larger turbines, the company said in its statement.

Vestas states that demand for the new turbine will primarily be driven by Northern European markets, where the conditions at sea are particularly rough but hold enormous potential for clean electricity.

According to Anders Soe Jensen, president of Vestas Offshore, it will be an “obvious and ideal choice” for plans like the U.K. Round 3 projects.

The round refers to a raft of new offshore licenses awarded by Britain’s Crown Estate for the development of offshore wind farms across nine regions which could provide up to 32 gigawatts of wind generating capacity.

Shares seemed to react accordingly with the company’s announcement. Share prices rose as much as 3.5 percent when trading opened, which eased out at closing to 225.20 Danish kroner (about $42.7) a piece on March 30. Share prices continued to rise the next trading day.

On average, Vestas stock price went up 8.36 percent within the five-day period starting March 24 in Copenhagen.

The news could be seen as a boost to Vestas’ position in the global wind turbines market as Chinese rivals led by Sinovel and Goldwind continue to climb rankings, as shown by a MAKE Consulting report last month.

The wind industry consulting firm said the decade-old Vestas had 12 percent of the global market which was put at 38 gigawatts in total in 2010. Vestas estimates that it has installed 25 percent of the world’s onshore wind capacity and 43 percent of offshore capacity.