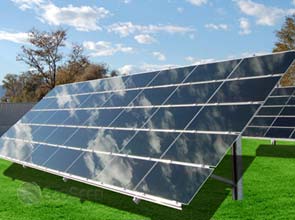 General Electric plans to build what it claims will be the largest thin-film solar factory in the United States, banking on a thin-film solar company that uses high-efficiency cadmium telluride technology for its solar cell. The United States’ largest conglomerate said on Thursday it will spend about $600 million to build the manufacturing plant that will produce 400 megawatts’ worth of thin-film solar power-derived electricity.

The plant’s location was not announced, but G.E. said it will disclose the site soon after choosing from a number of options being considered.

Planned to start running by 2013, production at the plant will be enough to power 80,000 homes.

G.E. will be using a thin-film solar cell technology developed by PrimeStar Solar, a five-year-old Colorado thin-film startup that it has now taken full control of. G.E. has had a majority stake in the firm since 2008.

PrimeStar’s cadmium telluride-based cell boasts a 12.9 percent sunlight conversion efficiency rating verified by the National Renewable Energy Lab as the most efficient cell of its type.

While 12.9 percent is lower than efficiencies achievable in laboratory settings, PrimeStar’s 12.8-percent efficiency rating is promising from an industry point of view.

Cells made from silicon, the dominant solar cell material in the market, can convert sunlight to electricity with up to 20 percent efficiency.

G.E. said this makes it a “key component,” for offering “advanced solar products while reducing the total cost of electricity for utilities and consumers” and establishing a share of the market.

In the solar industry, each single point percentage increase in efficiency results in an approximate 10 percent decrease in system cost, G.E. said.

“Milestones like these are pivotal as the United States looks to drive widespread adoption of solar technologies,” said Ryne Raffaelle, director of the National Center for Photovoltaics, an NREL unit that had a cooperative research program with PrimeStar in 2007 to develop their thin-film cells.

Under chief executive Jeff Immelt, G.E. had expanded its renewable energy portfolio through its wind turbine business which it entered in 2002 and now generates for the company about $6 billion in annual sales. G.E. is now among the world’s largest wind turbine makers.

However in 2009, G.E. decided to sell its only crystalline silicon solar panel assembly plant in Delaware.

The current move is seen by experts as a sign that G.E. might focus its solar investments in technologies that use non-silicon materials – like cadmium telluride for thin-film.

“Solar is a crowded field. We invested in a start-up company. We’ve got something that looks good, that looks competitive. Again, five percent share in this business is $2 billion or $3 billion by 2015,” Mr. Immelt told investors in December last year.

G.E. says it has more than 100 MW of new commercial deals for solar thin-film products, including panels, inverters and complete solar power plants.

G.E.’s largest solar agreement to date is with NextEra Energy for 60 MW of thin-film solar panels.

It had also signed a 20-MW solar agreement with Invenergy for the supply of thin-film solar panels and G.E. Brilliance inverters. The Chicago-based renewable energy company will install the solar project in Illinois.

A $3.2-billion deal last week to buy Converteam, a French company that makes equipment allowing solar and wind electricity to be used by the grid, could further help in the company’s overall strategy.

First Solar, which pioneered thin-film solar technology in the world, has a commanding lead in cadmium telluride-based thin-film cells, with $12.73 billion in market capitalization.

It currently has factories producing a total of 1.4 gigawatts of thin-film products, with expansion plans for up to 2.7 GW by 2012.

Abound Solar is also in this market. The company was able to secure a $400-million loan guarantee from the Department of Energy and $110 million in equity financing last year to build a new factory and expand an existing one.

The new factories, along with an existing 65-MW plant, will give Abound 840 MW in thin-film production capacity by the end of 2014.

Is cadmium telluride a safe bet?

But cadmium telluride, one of the first types of thin-film solar to hit the market, does have issues.

Analysts have long pointed out that cadmium can be toxic and could be banned by concerned European countries for use in solar cells.

Competing companies are meanwhile starting to mass produce the next generation of thin-film solar material made from copper indium gallium selenide or CIGS. Thin-film solar cells made with this material have already reached 15.7 percent efficiency in NREL lab settings.

A variety of startups like California-based firms Miasole, Nanosolar, and Solyndra are all planning to ramp up their production this year using CIGS as a material for their thin-film solar cell products.

Interestingly, big companies like G.E. and First Solar are still investing in cadmium telluride rather than CIGS considering the possible gains in efficiency.

Scientists say CIGS is a tricky material to work with because manufacturers need to blend four materials, compared with cadmium and tellurium which are mining byproducts.