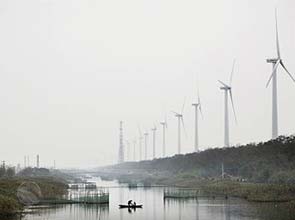 China is seen as responsible for pulling the entire global wind power capacity, which is now at 197 GW.

“China has become the single largest driver for global wind power development. In 2010, every second wind turbine that was added anywhere in the world was installed in China,” said G.W.E.C. secretary general Steve Sawyer in a statement.

C.W.E.A. secretary general Qin Haiyan said the installed capacity of 44.7 GW includes turbines which have been connected to the grid and are delivering electricity, even if they have not yet completed the commissioning and acceptance procedure, which can take several months.

Government support in wind energy investments was seen as a factor driving the growth in installed capacity and of Chinese wind manufacturers exporting products and supplying the global market.

China’s largest exporting manufacturers include Sinovel, Goldwind and Dongfang Electric, one of the world’s top 10 suppliers along with Germany’s Vestas, Spain’s Gamesa, and India’s Suzlon.

“The growth of wind power in China has also spurred a boom in domestic manufacturing, and four out of the top 10 global wind turbine manufacturers are now Chinese, with Sinovel and Goldwind ranking second and fourth respectively,” said Li Junfeng, president of C.R.E.I.A.

With its vast coastline and large offshore islands, China is said to be rich in wind energy resources that can be developed for over 3,000 gigawatts of capacity.