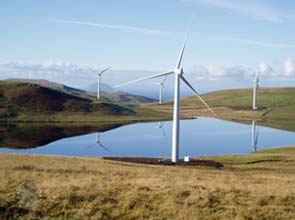 Infinis bought the 30-megawatt Dalswinton wind farm and 36.8-MW Minsca wind farm both located in Scotland, with the 30-MW Slieve Divena wind farm in Northern Ireland according to a statement from SSE. The Royal Bank of Scotland and National Australia Bank financed the deal.

The Dalswinton and Minsca wind farms, which began operations in 2008, had previously entered a 15- year power purchase agreement with an unnamed utility.

Acquiring the three wind farms doubles the onshore wind energy capacity of Infinis from 77 MW to 174 MW. By 2013, it expects to expand this further to 230 MW as it seeks to be part of Britain’s top 10 wind operators.

The three sites are not Infinis’ wind energy asset purchase from SSE. It previously bought SSE’s Ardrossan wind farm for £28.1 million in cash in May 2010. The 30-MW power plant was originally owned by the utility through Airtricity and Denmark’s Viridis on a 51 percent-49 percent basis. The utility acquired Viridis’ interest in April 2010.

Infinis was previously part of Waste Recycling Group which Terra Firma bought for 836 million euros in 2003. The equity firm decided in 2006 to separate W.R.G.’s activities into distinct waste disposal and renewable energy businesses.

From just 57 MW of generation capacity in 2003 using methane from landfills to produce electricity, Infinis now has a total installed capacity of 534 MW and operates 141 onshore wind, landfill gas and hydro plants across Britain.

Terra Firma’s chairman Guy Hands said that Infinis is the largest pure renewable energy company in Britain both in terms of number of sites and output.

According to statement, the company is generating about 10 percent of the country’s renewable power.

Terra Firma is based in London and has invested 14 billion euros acquiring large, asset-rich businesses mostly in Europe. Its interests are mostly in housing and real estate but have also acquired companies from the renewable energy sector, particularly in wind, to capitalize on its booming growth.

The equity firm previously acquired Everpower Wind Holdings, a developer of wind farms based in New York in August 2009, marking its first acquisition in the United States. Reuters reported that the deal was worth $350 million and that it is developing several sites with the potential to produce 800 MW by 2014.

Around 34 gigawatts of wind generated power came online in 2010, 3.5 percent more than 2009, according to a report from Make Consultancy published in March this year.

From last year’s installations, the global wind market is expected to grow 11 percent annually until 2016 led by China and partly by the United States in the near term.