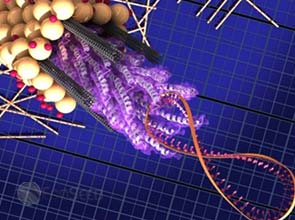 Massachusetts Institute of Technology researchers have genetically engineered a virus that can be used to control the arrangement of nanotubes in solar panels, thereby increasing the panel’s efficiency.

Previous studies have shown that using carbon nanotubes – microscopic, hollow cylinders of pure carbon – can enhance the efficiency of a solar cell’s electron collection. However, using these nanotubes proved to be challenging, for two reasons.

The first challenge facing the researchers was found in the creation of the nanotubes. The process of creating carbon nanotubes produced two types, one which acted like semiconductors and the other that acted like metals. While semiconducting nanotubes improved efficiency, the metallic ones had the opposite effect.

Another problem was that the carbon nanotubes tended to clump together, reducing their effectiveness.

To get around these problems, graduate students Xiangnan Dang, Hyunjung Yi and Angela Belcher, along with other researchers, engineered a virus called M13 to control the arrangement of nanotubes.

Testing out the virus, the research team used a dye-sensitized solar cell, an inexpensive cell that makes use of titanium dioxide instead of silicon.

Utilizing the virus resulted in an increase in power conversion efficiency, from eight percent to 10.6 percent – an improvement of one-third.

The virus, taking up only 0.1 percent in the weight of the finished cell, performs two different functions.

First, the virus’ proteins called peptides bind tightly onto the carbon nanotubes, holding them in place and keeping them separated from each other. Each virus can hold five to 10 nanotubes.

The researchers believe that this development in solar technology can be applied to other types as well, such as quantum-dot and organic solar cells.

M.I.T.’s process of using a genetically engineered virus is only one of the few developments in nanotechnology in solar panels of recently.

Researchers at Arizona State University utilized nanoparticles of graphite in the heat-transfer oils used in solar thermal systems to increase its heat-absorbing properties.

Meanwhile, a research team from Xiamen University in China and the University of North Carolina used nanowires that improve a solar cell. By using zinc oxide nanowires coated with zinc selenide, they were able to harness near-infrared wavelengths of light increasing the range of solar radiation that the cell could absorb.