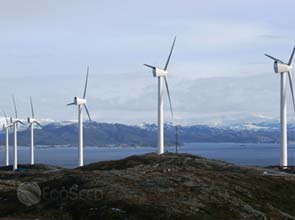 General Electric Company reported a 6 percent increase in its revenues this quarter from its overall operations compared last year but saw its wind turbine orders, its primary renewable energy product, tumble because of lower turbine prices.

The New York-based conglomerate had $38.4 billion in revenues in the first three months of this year and had first quarter operating earnings of $3.6 billion, up 58 percent compared with the same period last year, according to a press release from G.E.

According to a document from the United States Securities and Exchange Commission, its energy infrastructure segment contributed $9.45 million in revenues, up 9 percent from last year’s first quarter, and had $1.381 million in profit, a 7 percent decline.

“We shipped 366 wind turbines versus 349 last year, but the growth came from more 2.5MW units so we had some mixed impact there,” Mr. Sherin said.

G.E. said it took orders for 327 turbines in the quarter, down from 494 in the first quarter of 2010. Pricing on the orders slid 3 percent, which the company believes decreased GE’s overall industrial segment operating profit margin to 14.3 percent from 15.4 percent a year earlier.

However, Mr. Sherin said that “all are positive,” explaining that the decline in wind turbine orders are mainly local.

“I think right now we’re dealing with just the decline in the United States market and the change in margins that we had in that market, but overall we’re very committed to it,” Mr. Sherin says. He adds that the company’s United States wind turbine backlog was “very profitable”.

Jeff Immelt, G.E.’s chairman, said that most of the company’s wind deals during the first quarter “were in places like Brazil and Canada”. In general, Mr. Immelt expects its energy business segment to pick up in the second half of the year.

“I like our position in gas turbines and wind turbines and I think it is going to play out over the next three to five years that those too will have a good future,” Mr. Immelt says.

G.E. also reported a 12 percent hike in its research and development budget in the first quarter to improve and develop products that are expected to drive growth in orders across its operations.

One area that could receive more attention is its solar energy business, owing to its huge demand. For instance, it plans to spend about $600 million to build the largest thin-film solar factory in the United States that will produce 400 megawatts’ worth of cadmium telluride-based thin-film panels, a technology that has yet to be perfected, from PrimeStar Solar.

The company also picked up Well Support, a division of Britain’s John Wood Group for $2.8 billion and Dresser, a manufacturer of natural gas engines, fuelling systems, and other components for $3 billion last February. Wellstream Holdings, the British oil services company, was also acquired for $1.25 billion in December 2010.