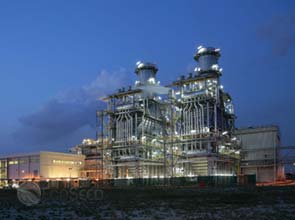 French engineering group Alstom has begun constructing the second phase of the gas-fired combined power plant with a 400-megawatt capacity in Singapore. Combined cycle power plants are considered energy efficient as they reuse the exhaust heat otherwise released as waste. This way, more energy is generated from the plant’s operations.

In October 2010, Alstom won a contract to build and operate an 800-MW gas-fired combined cycle power plant for Keppel Merlimau Cogen Pte Ltd. that will be put up in two phases, as well as an 18-year maintenance contract.

Both phases involve a 400-MW power plant with one-and-half-year maintenance. The first phase is valued at 320 million euros ($471.62 million), the latter is 300 million euros.

Alstom said its GT26 gas turbine has 60 percent efficiency and lowers the kilowatt-hour cost without reducing availability of power.

A completed power plant is expected to raise the production capacity of K.M.C. to 1.3 gigawatts, which will likewise increase the company’s electricity portfolio in Singapore.

About 10 percent of Singapore’s electricity is supplied by K.M.C., a unit of Keppel Energy Pte Ltd. that is a subsidiary of the larger conglomerate Keppel Corporation Ltd.

“We have every intention of building on this success and continue implementing our growth strategy in Asia.”

The plant utilizes as well the GT26, providing Sembcorp high flexibility and efficiency in bringing in a stable minimum amount of powers to its customers at the lowest cost.