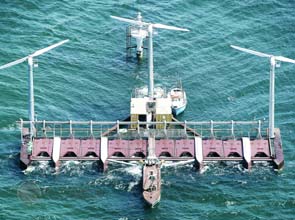 Denmark’s Floating Power Plant A.S. and Bridgeworks Capital from Oregon formed a United States-based company to develop a unique power plant that can harness both wind and wave energy at sea.

The joint venture, named Floating Power Plant Inc., plans to commercialize the Poseidon Wave/Wind Energy Platform, a floating power plant fitted with wind turbines on top of floats that can generate energy from wave motion. Its Danish parent company has spent 12 years and $12 million to develop it.

The company is seeking both funding and partners to test a Poseidon module in the Pacific Ocean off the Oregon coast, where waves are stronger. A facility adapted to Pacific conditions could convert 30 percent to 35 percent of its waves into electricity, the company said.

So far, a grid-connected prototype has been running for two years at Vindeby offshore wind park off the coast of Lolland in Denmark. The Poseidon 37 measures 40 meters wide and can produce over 50 gigawatt-hours of power per year, equal to the yearly power consumption of up to 15,000 private households.

“Floating Power Plant has a thoroughly tested, mature solution in the space, and we have a strong plan to scale the business and become a leading producer of floating power, a true renewable energy at a timely market moment,” Mark Waller, BridgeWorks president, said.

Aside from its waves, Floating Power said having an Oregon-based partner offers Poseidon better chances to do well in the market.

The company said the state already has an electric grid it can use, and having wave energy groups Oregon Innovation Council and Oregon Wave Energy Trust and marine universities like the Oregon State University in the area can contribute immensely.

Floating Power’s partner, Bridgeworks Capital, is a specialized merchant bank that arranges private or public financing and mergers or acquisitions. It has helped launch four solar companies over the last five years, including PrimeStar Solar which was purchased by General Electric in April 2011.

Columbia Power’s SeaRay, Ocean Power’s PowerBuoy and Neptune Power’s Wave Energy Conversion Device are classified as wave buoys, which appear as disk-like units generating electricity as it bobs up and down the ocean’s waves.

Aquamarine Power’s Oyster 1 and 2 also harness the rise and fall of water but is shaped as a hinged flap which sways backwards and forwards, driving two hydraulic pistons that push high pressure water onshore to drive a hydro-electric turbine.

M3 Wave Energy has yet to unveil how its wave power device works and looks like. Called a Delos-Reyes Morrow Pressure Device, the device resides entirely under the surface of the ocean, according to the company’s website.

The World Energy Council has estimated that approximately 2 terawatts – about double the current world electricity production – could be produced from the oceans via wave power.