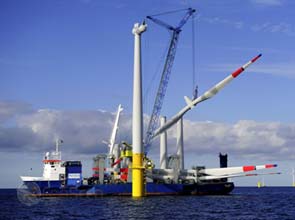 EnBW obtained the project in 2008, and then placed an order with Siemens A.G. a year after for the supply of 21 wind turbines each with a capacity of 2.3 megawatts.

Each turbine has a rotor diameter of 93 meters, standing as high as church towers. They can come up with a combined capacity of 185 gigawatts to supply electricity to about 50,000 German households.

In addition to state subsidies, Mr. Albers said policies that impede growth, such as height restrictions for wind turbines, must be lifted to foster more development in offshore wind.

Mr. Albers said wind energy can provide up to 65 percent of Germany’s energy needs, citing a recent study from the Fraunhofer Institute for Wind Energy and Energy System Technology initiated by the association.

Germany added 108 megawatts of offshore wind capacity in 2010, and the figure is expected to reach 3,000 MW in 2015, Global Wind Energy Council figures show.

But with regard to cost, Mr. Albers said onshore wind is cheaper than offshore.

One of the issues in developing offshore wind farms is the cost and complexity of connecting the facilities to the mainland grid.

For example, electricity produced from Baltic 1 will be relayed to a 150-kilovolt substation, and transported to the coast through a 60-kilometer long marine cable.

From the coast, electricity will flow toward the Bentwisch substation from where it will be transferred to mainland grid.

Germany has now completed the construction of 400-megawatt high-voltage direct current line to be used for offshore wind farms. The technology is said to be cost-effective in transferring power as it reduces electricity loss during the process.

The three-year Baltic 1 project is expected to provide lessons for EnBW’s next 288-megawatt Baltic 2 wind farm, scheduled to go online in 2013.

This wind farm, located 32-kilometers off the western coast of Baltic Sea, will comprise 80 Siemens turbines, each with a capacity of 3.6 megawatts and a rotor diameter of 120 meters.