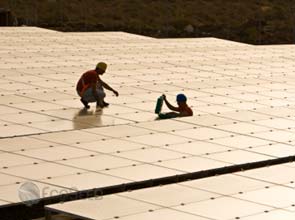 SunBorne Energy, a Haryana, India-based solar company that provides utility scale products, and Suntech Power Holdings Ltd., one of the world’s largest producers of solar panels, agreed to supply India with 100 megawatts of solar panels over the next two years.

SunBorne Energy, based in Gurgaon, will install the panels while Suntech supply the modules. The companies will use 280-watt peak polycrystalline silicon modules with 16 percent efficiency. An initial 10 MW of solar panels will be supplied to Gujarat state.

The companies will take advantage of India’s Jawaharlal Nehru National Solar Mission, the government’s blueprint for increasing solar power capacity in the country.

Zhengrong Shi, Suntech’s chief executive, explained that one out of every three Indians still do not have reliable access to electricity. He pointed out that the rapid deployment of solar energy has the potential to help close this gap, and provide thousands of people in India with affordable power.

According to the International Energy Agency, total primary energy demand in India is expected to increase by 3.1 percent annually from 2008 to 2035.

With 2,000 sun hours yearly in some locations, solar technology is seen as a viable option for the country to answer its growing energy needs.

India’s Jawaharlal Nehru Solar Mission aims to commission 20 gigawatts in grid-connected solar power by 2022. Backed by the government at both federal and state levels, the country’s solar industry is growing rapidly.

So far, India’s Ministry of New and Renewable Energy has approved 802 MW worth of grid-connected solar projects in 2010.

As part of the solar mission, the ministry also said that six major research projects were accomplished last year, including the setting up of the National Center for Photovoltaic Research and Education.

Meanwhile, the Asian Development Bank will be providing credit guarantees of up to $150 million to private companies that plan to build solar power plants in India. This guarantee covers 50 percent of the payment default risk on bank loans made to project developers.