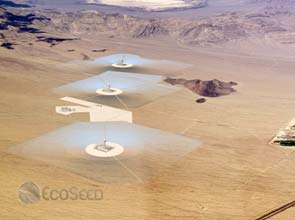 NRG Energy, Inc., the largest independent power producer in the United States, had significant quarterly losses following its decision to abandon the development of two nuclear plants in Texas although it vows to bounce back with more utility-scale solar power plants in the coming months.

The company incurred a $481 million impairment charge for writing down its plans for the South Texas Project in April, a move taken in response to regulatory uncertainty following the ongoing Fukushima Daiichi nuclear disaster in Japan.

“The tragic nuclear incident in Japan has introduced multiple uncertainties around new nuclear development in the United States which have had the effect of dramatically reducing the probability that [South Texas Project] 3 and 4 can be successfully developed in a timely fashion,” said David Crane, chief executive NRG.

One of NRG’s partners on the two planned 1,350-megawatt reactors was to be Tokyo Electric Power Company, the Japanese utility that owns the reactor complex crippled by the March 2011 earthquake and tsunami.

Affected by the write-down, the wholesale power generation company incurred a net loss of $262 million, compared with a net income of $56 million a year earlier for the same period.

However, Mr. Crane insisted that the impact of Japan’s nuclear crisis on the South Texas Project draws attention away from the strong operational performance the company achieved in the same period, particularly in securing financing for its solar power projects.

The 290-MW Agua Caliente solar PV project was also awarded a conditional loan guarantee of up to $967 million in January.

By investing $300 million in October in Ivanpah, NRG, through its solar subsidiary, now owns 50.1 percent of Ivanpah, along with Google Inc and BrightSource.

New Jersey-based NRG plans to invest more into solar projects – $800 million for Agua Caliente over the next three years and $450 million in California Valley for the next four years starting in the third quarter of 2011 at the latest.

Mr. Crane said he has a “clear line of sight” into the financing of nearly 900 megawatts’ worth of solar projects, all of which will begin construction by the end of this year.

He said most of them will be utility-scale solar PV projects that will sell power through long-term contracts from either Pacific Gas & Electric or Southern California Edison, according to a statement.

“Our conclusion is that apart from the actions we already have announced and implemented with respect to our nuclear development program, the rest of our strategy is more compelling than ever,” Mr. Crane said.

“We’re on the right track both in terms of focusing on our solar-focused renewable strategy … in high-value locations within our core markets,” he added.

NRG owns and operates power plants that provide 25,000 megawatts of electricity from a mix of natural gas, coal, nuclear and renewable energy sources. It provides electricity to more than 1.8 million customers through its retail subsidiaries in Texas and Northeast United States.