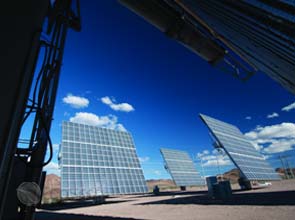 The United States Department of Energy offered a conditional commitment for a $90.6 million loan guarantee to Cogentrix Energy L.L.C., a unit of Goldman Sachs Group Inc., to build the world’s largest concentrating solar photovoltaic power plant to be built in Colorado.

The offer means the federal government is willing to secure Cogentrix’s loans to its creditors in the case of a default. The conditional commitment lays out the requirements before the guarantee is approved. This is among the earliest loan guarantees the department is giving for a CPV project.

The loan will help fund the 30-megawatt Alamosa Solar Generating Project to be built in south central Colorado near the city of Alamosa.

Cogentrix plans to use CPV panels from California-based Amonix Inc. The panels use special mirrors that can concentrate sunlight hundreds of times onto a small solar cell area for increased efficiency.

Amonix’s panels have multijunction cells, with each layer optimized to capture different light wavelengths to convert as much as 40 percent of the sun’s rays to electricity. This is double the conversion efficiency of traditional PV panels used in areas with high amounts of direct sunlight, according to a statement.

Based on information released last year, construction of the Alamosa project should have already started during this year’s first quarter to start providing electricity in the second quarter of 2012.

The project has signed a 20-year power purchase contract with the Public Service Company of Colorado, a private utility. Enough to power over 6,500 homes, it can also avoid the emissions of over 43,000 tons of carbon dioxide per year.

In just over two years, the Department of Energy’s loan program has issued loans, loan guarantees, and conditional commitments to 28 clean energy projects, 16 of which have met requirements and have been finalized. That equates to over $30 billion in financing for projects with a total project cost of over $47 billion.

But Jonathan Silver, the head of the agency’s loan programs office, said its loan guarantee program for renewable energy generation projects will not be able to accommodate all funding applicants as deadline draws near.

The Section 1705 program, one of the three types of loans or loan guarantees being offered by the department, is set to expire on September 30. Mr. Silver said only projects that can start construction and close their loan guarantees by that date will be considered.

D.O.E. has issued 19 loan guarantees or conditional commitments under Section 1705 since March 2009 worth $11 billion in investment. These 19 projects are expected to account for nearly two-thirds of the program’s $2.4 billion in appropriated funding

Projects include the 845-MW Caithness Shepherds Flat – the world’s largest wind farm and the 383-MW Ivanpah and 250-MW Solana solar thermal power plants that will nearly double the amount of commercial solar thermal electricity produced in the United States today.

The department had earlier placed another group of applications «on hold» after determining that the projects were unlikely to meet the deadline, Silver wrote in a blog post on the D.O.E. Web site.

“Given the rigorous technical, legal, and financial requirements, it is possible that not all of these projects will succeed by September 30th, but each of them will have a chance to compete for the remaining funding,” Mr. Silver said.

Tenaska Solar Ventures said in March it is also awaiting decision on a Department of Energy loan guarantee for an even larger 150-megawatt CPV solar project for San Diego Gas & Electric. The Imperial Solar Energy Center will use Concentrix CPV panels from Soitec.

The largest CPV project built in the United States last year was a 1-MW project by developer SolFocus at Victor Valley College in California. Last month, Amonix took the belt from SolFocus with a 2-MW project it developed with Granite Construction and University of Arizona at the university campus in April.