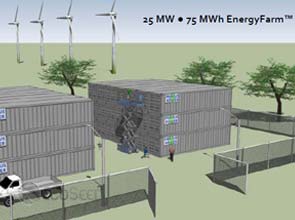 Existing investors Kleiner, Perkins, Caufield & Byers, and Chrysalix also participated in the round.

Flow batteries theoretically should have no performance loss because it relies on the chemical reactions between electrolytes. In comparison, electrode-electrolyte reaction in traditional batteries deteriorates the metal after many charging and recharging cycles, thus decreasing its capacity and output.

It also can have almost unlimited electricity storage capacity, the only limiter being the capacity of the electrolyte storage tanks.

Flow batteries are categorized by the chemistry of the electrolytes some now available commercially while others are just emerging from development. Among the more popular is vanadium redox, which, according to a review from the Pacific Northwest National Laboratory, can store energy for 12 hours.

Primus Power said its flow battery is low-cost and can be used to support renewable energy. In 2009, it was awarded $14 million as part of a $47 million Department of Energy project to build a 25-megawatt storage system for the Modesto Irrigation District in California. The 75-megawatt-hour installation was intended to smooth out intermittent electricity from wind energy projects.

Other startup flow battery makers in the United States that have already raised significant amounts of capital from investors include EnerVault and Deeya Energy. Like Primus Power, they have kept specifics about their technology under wraps.

According to CleanTechBase, Sunnyvale-based EnerVault, founded last year, has raised $3.5 million in venture funding from Oceanshore Ventures and US Invest last year, and received a $650,000 from the New York State Energy Research and Development Agency in 2009.

Other startups have disclosed details about their flow batteries. Maryland-based PrudentEnergy uses vanadium redox for their batteries while Massachusetts-based PremiumPower and 24-year old ZBB Energy Corp based in Wisconsin use zinc-bromine similar with Primus Power.