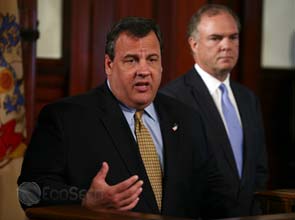 Two weeks after pulling out from a 10-state regional greenhouse gas reduction program, New Jersey Governor Chris Christie now plans to cut back the state’s target on the amount of electricity it has to derive from renewable energy sources by 2021.

The governor recommended reduction of the state’s Renewable Portfolio Standard to 22.5 percent, saying the 30 percent goal set by his Democratic predecessor, Jon Corzine, was not achievable.

Mr. Christie reaffirms that he remains a supporter of solar, wind and biomass for power generation.

However, he said nuclear power and natural gas also must play a role in the state’s energy policy if it’s serious about meeting its goals to reduce carbon emissions and generate more electricity in the state.

The changes are part of revisions of the state’s 10-year energy master plan set in 2008, around a year after the governor asked the New Jersey Board of Public Utilities to re-evaluate its goals “in light of economic conditions.” The board will hold three public hearings over the summer to debate on the plan.

Mr. Christie’s 141-page draft encourages large-scale commercial solar projects particularly in unused lands over residential ones. The governor said solar projects in homes are costly for ratepayers who do not have such projects because they pay for the subsidies on their monthly electric bills.

Electricity costs in New Jersey are the fourth highest among states in the country while producing a megawatt-hour of solar photovoltaic is more than four times nuclear and five times coal, the draft stated.

Of 8,688 solar PV projects to date, 6,949 have been residential. With 330.5 MW statewide, New Jersey ranks second to California in solar installations.

For wind power, the governor endorsed financial subsidies to support an initial target of at least 1.1 gigawatts’ worth of offshore wind farms off New Jersey’s coast. Acknowledging a growing trend for bigger turbine designs, the plan assumed manufacturing facilities must be located at nearby Port of Paulsboro or port districts in New York and New Jersey.

As of the second quarter 2011 there have been no offshore wind plants constructed in the United States, nor have there been any offshore wind project that has completed project financing.

Turning to biomass, the report recommends reassessment of incentive programs to develop the industry. It said New Jersey residents generate more waste per capita than almost any other state, but only 17 percent is converted into energy.

It estimates the state could utilize as much as 65 percent of it to produce 1.299 GW of power, or 9 percent of the state’s energy needs.

Given the limited tracts of New Jersey farmland, the plans said the state should not encourage conversion of valuable farmland to dedicated biofuel crops.

Despite provisions to boost renewable energy projects, Mr. Christie left the door open for new nuclear plant in the state to replace one that will shut down in eight years. His administration is assessing the possibility of building a replacement for the 654-MW Oyster Creek nuclear facility.

In addition, the energy plan also emphasized the need to generate electricity from natural gas-fired plants and expanding natural gas pipelines. However, the draft energy master plan includes the governor’s recent promise to ban new coal-fired power plants and pledges an orderly closure of the oldest ones.

Environmentalists were quick to criticize the changes, saying Mr. Christie’s plan, coming so soon from its withdrawal with the Regional Greenhouse Gas Initiative, would damage New Jersey’s long history of being one of the nation’s clean energy leaders.

Last month, Mr. Christie announced that New Jersey will no longer participate in the Northeast’s 10-state cap-and-trade program, which he said was a failure at cutting pollution and a burden to taxpayers.

«The clean energy goals we are currently meeting are being rolled back. The E.M.P. is EMP-TY and this plan undercuts our efforts,» he added.

Part of Sierra Club’s disapproval was the possible reduction or elimination of the Societal Benefits Charge. Costing on average just around $56 a year per household, it pays for energy efficiency, clean energy, assistance for low-income customers, and other programs in the state.

A report by the Pew Charitable Trusts on green job growth found that green jobs in New Jersey declined by 9.6 percent, placing New Jersey second to last on the list. The American Council for an Energy Efficient Economy dropped New Jersey from its list of «top ten states» pursuing energy efficiency.

David Pringle with the New Jersey Environmental Federation, which endorsed Mr. Christie in the 2009 gubernatorial race, said the master plan “got it backwards.”

«Today Governor Christie did a flip flop. In 2009, he criticized Governor Corzine for not doing enough to achieve New Jersey’s aggressive clean energy and green economy goals and committed to being more aggressive in achieving them. Today he announced he’s abandoning those goals,» said Mr. Pringle.

«The Governor suggested a double standard today…pushing the envelope on clean renewables is pie in the sky but a multi-billion dollar, unfinanced fifth nuke in a post-Fukushima world is not!” he stressed.

New Jersey is the most densely populated state and has four nuclear reactors, including Oyster Creek, the country’s oldest. All of them are similar in design to the Fukushima Daiichi reactors in Japan that were damaged by an earthquake and tsunami in March.

Nearly 50 percent of all energy generated in New Jersey comes from nuclear power, 37 percent from natural gas, 9 percent from coal and less than 1 percent comes from oil. As of 2010, only 2.35 percent of energy was produced using renewable sources, according to the state.