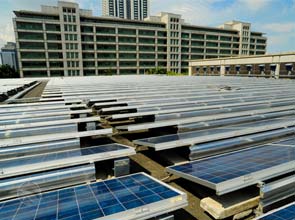 The Manila headquarters of the Asian Development Bank is now running on 100 percent renewable energy.

“As an institution, we are strongly committed to expanding the use of renewable energy across Asia and the Pacific, so it is only fiting that we walk the talk in our own headquarters,” said A.D.B. Vice President Bruce Davis.

AdventEnergy Inc., a licensed retail electricity supplier of Aboitiz Power, will be supplying A.D.B. with power generated at their geothermal plants in Tiwi in Albay province and Makiling-Banahaw in Laguna province.

“This agreement will allow us to cut our annual corporate carbon footprint by nearly 50 percent, with an emission reduction of more than 9,500 tons of carbon dioxide equivalent,” said Mr. Davis.

A.D.B. will purchase an average of 1.5 million kilowatt hours of electricity a month from AdventEnergy.

The A.D. B. headquarters already gets some of its power from solar energy via the largest rooftop solar installation in the country, a 571 kW project installed by Suntech Power Holdings Co., Ltd. last June (see related story). These rooftop solar panels generate around 50,000 kWh of clean energy a month.

The energy purchased from AdventEnergy and generated by the solar panels is enough to meet the energy requirements of the A.D.B. headquarters building with its staff of more than 2,600 people.

The move follows A.D.B.’s decision to take advantage of electricity reforms in the Philippines which allow large users to choose their power suppliers. Following a competitive bidding process, A.D.B. chose AdventEnergy as it was the only bidder to offer a large part of its energy generated from renewable sources. – EcoSeed Staff