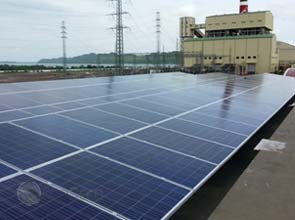 Back in May 2013, Solenergy was awarded two project contracts: one from Fortune 100 company Kraft Foods/Mondelez International, and the other with a local power generation company.

Aside from generating renewable energy, the solar panels offered the additional benefit of reducing the direct sun light that hits the rooftop, essentially acting as an additional insulation layer for the building.

Completion of the project was done quickly, with only the importation of solar inverters taking much time, as they were imported from Germany so as to assure component quality, according to Solenergy’s Chief Executive Officer Tom Peebles in an interview with EcoSeed.

The solar project is part of Kraft Foods’ corporate social responsibility drive, as the company was looking to invest in something that was significant, but at the same time, offered a return on investment that justified a larger system size and scope than originally planned. The system is feeding three-phase power to their food manufacturing processes.

The second contract awarded in May 2013, was a solar power project with a major power generating facility on Panay Island. The system is a 40.5 kW solar array, installed at the roof of the newly constructed administration building at the power plant’s site. Project construction was completed in just two weeks.

The client had already made plans to invest in solar power even before the completion of the construction of the administration building. The corporation chose Solenergy to help them utilize solar power, working in conjunction with their existing on-site power plant that feeds the Panay grid.

Solenergy’s third project was awarded in October 2013 with the government-owned Land Bank of the Philippines. The solar project is a 4 kW solar array which was installed on the roof of Land Bank’s branch in San Fernando City, Pampanga – the bank’s regional headquarters in the province.

The project, which was completed in two days, is seen as the first step of Land Bank’s venture into renewable energy. The bank has also expressed interest in harnessing solar power in its other branches as well.

It can be remembered that Solenergy had also completed a solar power project back in August 2013. The project was with International School Manila (see related story).

All of the solar panels used in the four projects came from solar power modules manufacturer Canadian Solar.