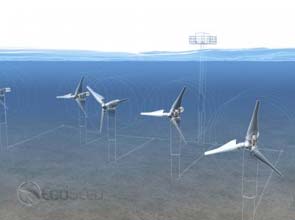 The agreed seabed rights include six new wave and tidal current demonstration zones as well as five tidal current project sites that will each have the potential to deliver anywhere between 10 and 30 megawatts of power.

The agreed seabed rights include six new wave and tidal current demonstration zones as well as five tidal current project sites that will each have the potential to deliver anywhere between 10 and 30 megawatts of power.

“By providing these additional seabed rights we are pleased to be enabling further technology development and commercialization, which will be critical if the U.K. is to unlock its significant natural resources for wave and tidal current energy,” said Rob Hastings, director of Energy and Infrastructure at The Crown Estate.

In line with this, Siemens business Marine Current Turbines has secured Agreements for Lease for three new commercial-scale tidal projects: Mull of Galloway on the west coast of Scotland, Portland Bill on the south coast of England, and Strangford Lough in Northern Ireland.

The secured sites were identified following a U.K.-wide assessment of locations with the potential to be economically viable tidal projects suitable for M.C.T.’s next generation SeaGen technology, which works just like an underwater wind turbine.

“The strategic decision to push forward with developing commercial-scale projects demonstrates Siemens commitment to the tidal sector and our confidence that there will be a future market for its SeaGen technology. Securing these new A.F.L.s is an important step in investigating the sites as part of the wider development process,” Sven Stoye, chief executive officer of M.C.T.

Using the SeaGen technology, it is estimated that each project will have up to 30 MW in capacity. M.C.T. is already in discussion with a number of prospective partners to co-develop the projects.

The A.F.L.s secured gives M.C.T. the green light it needs to start investigations on the sites, and start the consenting and consultation process.

Target date for installation of the M.C.T.’s projects is 2020 or 2021, with the date dependent upon the projects’ economic viability following detailed site assessment and after securing all the required consents. – EcoSeed Staff