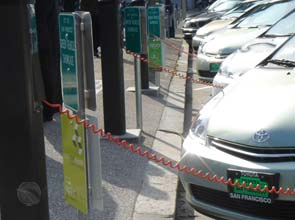 Coulomb Technologies said it will build nearly 5,000 charging stations in nine areas across the United States for a deployment program that will be supported by three leading car brands.

More than 1,000 new public charging stations will be added to the existing network in these areas by December while the rest will be installed by September next year. The company aims to hit 4,600 new installations.

The $37 million program is partly funded by a $15 million grant from the Department of Energy through its transportation electrification initiative.

G.M. plans to release the Chevrolet Volt by November while Ford will release an electric utility van and its electric Ford Focus next year. Smart will also begin pilot testing its electric Smart ForTwo by 2011.

Coulomb has the largest established base of networked charging stations worldwide with more than 700 units shipped to over 130 customers in 2009.

The company’s charging stations come in three variants. The Level III charger is its fastest charger, which can charge an electric vehicle in less than one hour at 480 volts. The 240-volt Level II charger can charge the same Chevy Volt up to 80 percent in around three hours to four hours, while the slowest Level I charger powered with 120 volts can charge the car in six hours to eight hours.

The charging network includes software for station owners to set billing rates depending on the time of day. Regions, for example, could offer cheaper rates during off-peak hours to encourage drivers to charge overnight. In addition, the charging station could send text messages or email notifications to tell drivers if charging is complete or interruptions had occurred.