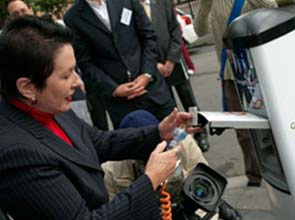 Plugs could soon become as ubiquitous as gasoline pumps in Australia after the country opened its first public electric vehicle charging station in Sydney on Tuesday, ahead of a planned national rollout. ChargePoint Australia will manage the charging station located in Derby Place, Glebe. The company plans to install similar charging infrastructures in Melbourne, Perth and Adelaide later this year.

The station can recharge a converted plug-in hybrid Toyota Prius, known to have an electric motor range of 30 kilometers, in three hours.

“The Glebe charging station will provide [behavioral] and energy usage data, which will be vital for effective and efficient energy management and future infrastructure planning,” he added.

The station will also be used for Sydney’s GoGet car share program. More than 700,000 cars travel throughout the city every day, significantly contributing to greenhouse gas pollution, congestion and noise.

Car share programs could be a solution since they can replace up to 10 privately-owned cars for each shared vehicle, according to Clover Moore, lord mayor of Sydney.

These programs provide a network of vehicles that members can reserve to use for short periods of time. Costs associated with fuel, insurance and maintenance are usually included in the operators’ car hire fees.

There are about 3,000 individual members of car share companies in Sydney, the majority of which belongs to GoGet. Sydney provides 120 dedicated onstreet car share spaces, four times more than any other city in Australia.

“Anything we can do to decrease the greenhouse gas emissions caused by motor vehicles is a step towards a healthier city. Together with public transport, walking and cycling, electric vehicles are part of the climate change solution,» said Ms. Moore.

GoGet also plans to add more electric vehicles into the company’s fleet as demand grows, according to its co-founder Bruce Jeffreys.

In addition to Sydney, other global cities that have charging stations for electric vehicles include San Francisco, Amsterdam , Philadelphia, Houston, Detroit, Vancouver and London.