Consumers interested in E.V.’s but reluctant to buy over price 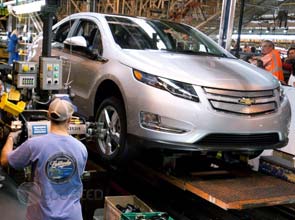 A new survey shows that consumers in the United States and Britain consider purchasing an electric vehicle – until they discover the price of owning one.

Around half of consumers in both countries – 51 percent from the United States and 57 percent from Britain – do not mind paying extra for an E.V., but not more than $5,000 above the average price of a standard vehicle.

“There are some obvious challenges, such as the higher cost of electric cars, that advertisers will need to navigate as they develop their marketing campaigns, but the overall interest shown by consumers in this survey is promising,” said Sallie Hirsch, vice president of research for Nielsen’s automotive unit.

Aside from the survey, Nielsen also analyzed the national television ads for electric cars. Nielsen noticed a large increase in advertising spending, which could be critical in raising consumer confidence and boosting car sales.

Nielsen noted that higher ad spending is a sign that the automobile industry has picked up after struggling through the recession and weakened consumer confidence.

Nielsen’s survey in the United States and Britain shows that aside from the higher cost of E.V.’s, advertisers should also address growing gas prices, which also weigh on the minds of consumers when shopping for a vehicle.

Despite the global push toward more fuel-efficient and environmentally friendly cars, 78 percent of consumers in both countries just wanted to buy an electric car to save on fuel costs. Helping the environment was secondary in consumers’ priorities.

While 70 percent of British consumers and 63 percent of American consumers claimed that the environment was their reason for going electric, respondents from the United States were 60 percent more likely than those in Britain to buy electric just to support E.V. manufacturers.

Ms. Hirsch said that big automakers like Chevrolet and Nissan have been ramping up their advertising efforts as they prepare to introduce new offerings – the Chevrolet Volt and Nissan Leaf.

Among 20 product categories, the automotive sector registered the highest growth in ad spending during the first half of 2010, coinciding with a rise in car sales.

Nielsen pointed out that more than $42 million was spent in the United States to advertise the Chevy Volt and Nissan Leaf.

Overall, the car industry spent $3.5 billion on advertising in the first half of 2010, up 27 percent from a year ago. This was driven primarily by General Motors, Chevrolet’s parent company, which hiked advertising outlay by 95 percent.