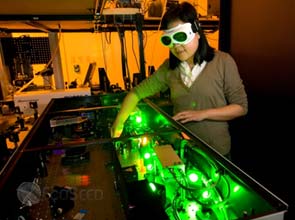 Researchers of Purdue University in Indiana have partnered with General Motors to develop a heat-harvesting system that can use a car’s exhaust to electricity and reduce its fuel consumption.

The prototype will be installed in the exhaust system between the catalytic converter. It will harvest heat from gases with temperatures about 700oC, overcoming a problem of existing thermoelectric devices. Current thermoelectric technology cannot withstand the average temperatures of gases inside catalytic converters, which stand at about 1,000oC.

The project is set to begin in January, with the first prototype seeking to reduce fuel consumption by 5 percent. Future systems will be capable of operating at higher temperatures, allowing for 10 percent reduction in fuel consumption.

Thermoelectric materials generate electricity when there is a temperature difference.

«The material is hot on the side facing the exhaust gases and cool on the other side, and this difference must be maintained to continually generate a current,» explained Xianfan Xu, a professor of mechanical engineering and electrical and computer engineering and leader of the research project.

Researchers at General Motors are using a thermoelectric material called skutterudite, a mineral made of cobalt, arsenide, nickel or iron in the thermoelectric generators.

The study received a $1.4 million, three-year grant from the National Science Foundation and the United States Department of Energy.