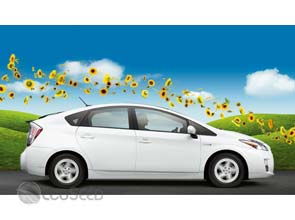 Americans are driving more hybrid, diesel and smaller cars this quarter compared to last year, moving away from gas guzzlers like pickups and sport utility vehicles as the fuels that power them continue to reach sky-high prices, a report from Baum and Associates said.

Meanwhile, plug-in hybrids are primarily run by the electric motor paired with a longer lasting rechargeable battery. The combustion engine acts as support, kicking in only when the battery charge is low, hence making P.H.E.V.’s run longer distances.

The auto analyst firm found that sales of hybrids grew 33.9 percent in the first quarter of 2011 compared to the same period in 2010. Sales of diesel cars, which are said to cleaner than its gasoline counterparts, grew 42.9 percent while lower mileage small car sales improved 23.3 percent.

March was particularly successful for hybrid cars, 46.4 percent increase from last year, while diesels increased by 46.1 per cent. By contrast, sales of fuel-demanding sports utility vehicles sales only increased by 7.2 percent.

As for electric vehicles, another strong contender in the alternative car market supported by a growing number of chargers worldwide, the report said it is just beginning with sales due to limited availability of models in the market like the all-electric Nissan LEAF or Tesla Roadster.

Alan Baum, principal analyst for Baum & Associates, said that the increase in fuel prices in recent months could explain why cleaner burning and smaller lower mileage vehicles are winning over consumers in the United States.

The study cited figures from the Energy Information Association, which showed that Americans are paying $3.791 per liter of gasoline on average last April 11, which is 30.4 percent more than what consumers were paying for last year. The price is a four-week average starting from March 21 compared with the same period last year.

«The trends are clear: vehicle sales are strong, and consumers want hybrids, small cars and crossovers, and are shying away from pickups and truck-based SUVs even as business fleets continue to support these products in line with an overall economic recovery,» Mr. Baum said.

The demand for small cars and hybrids also hold true in the used car market. Mr. Baum explained that higher resale prices for both car segments make it easier for consumers to buy a new vehicle since they can still expect high pay back.

The value of the Toyota Prius hybrid, for instance, rose 10.6 percent from January to April 2011, a rate exceeding all other high-selling vehicles in the report. Mr. Baum, said such an increase makes it clear that there is a big demand for the Prius in both the new and used vehicle market, despite massive criticism spurred by recalls in 2009.

«The bottom line is that automakers and consumers will move forward on all fronts based on corporate and consumer needs. Hybrid and electric vehicles are part of the solution, as are more efficient powertrains throughout the vehicle fleet, Mr. Baum added.