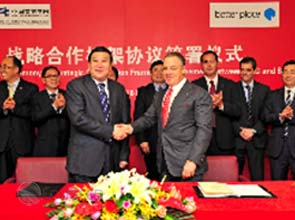 Under the agreement, both companies will focus on joint projects concerning E.V.s and infrastructures in C.S.G. service areas which spans five provinces. They will establish a battery switch station and a joint education center in Guangzhou before the end of the year.

The center will include interactive exhibits, meeting facilities, E.V.s for test driving and an automated battery switch station.

During the course of the year, both companies will also work on formalizing a joint-venture partnership.

“We believe that networked infrastructure is critical to enable broad adoption and focusing on charging alone would be too costly and time-consuming,” said C.S.G. chairman Zhao Jianguo.

“The battery-switch model may become mainstream in China,” he added.

In line with the agreement made, executive vice mayor of Guangzhou, Wu Yimin, inked an agreement with Better Place’s chief executive officer, Shai Agassi, to encourage the municipal government of the city to assist C.S.G. and the E.V. services provider.

With this agreement, the city will aid the two companies’ efforts to establish a supply chain hub and electric car network across the country’s third largest city. It will help encourage local car manufacturers, such as Guangzhou Automobile Industry Group, to produce E.V.s with switchable batteries.

In addition, it will promote E.V. adoption in fleet segments, which will include public-sector vehicles and private-sector fleets such as taxis.

“China Southern Grid is an important partner in a huge market that is moving quickly toward the mass-market development of electric cars and is embracing battery switch as the primary means of range extension,” said Mr. Agassi.

For the past two years, China has made great steps in promoting the electric car industry. Back in 2009, China launched an E.V. initiative with the goal of putting a thousand electric cars in 10 cities yearly. The plan is to have 10 percent of all cars in China be E.V.s by 2012.

Just this January, the Chinese government has set a plan to create at least 10 million car parking spots for E.V.s by 2020.

Similarly, the State Grid Corporation of China, the largest state-owned power grid company, have set plans to build a total of 2,351 E.V. charging facilities and battery-swap stations, and 220,000 charging poles from 2011 to 2015. The move was made in anticipation of the projected 500,000 E.V.s in the country’s roads by 2015.