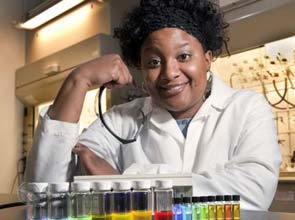 Ms. Jefferies-EL along with her research team has been working with a variety of benzobisazoles, molecules that are suitable for electrical applications because they efficiently transport electrons, are stable at high temperatures and can absorb photons.

The group is also working on synthesizing the polymers by making them soluble in organic solvents, without the need to go through intense acids and temperatures.

Certain properties of organic polymers have the capability to resemble those of conventional inorganic semiconductors. With the right structure, organic polymers could be used for electrical applications such as solar cells, light-emitting diodes, and thin-film transistors.

Ms. Jeffries-EL stressed that fundamental science being a key to her work with the organic polymers.

«With these polymers, if you don’t have the properties you need, you can go back and change the wheel,» Ms. Jeffries-EL said. «You can change the chemical synthesis and produce what’s missing.”

Conductive polymers started during the 1970s when researchers Alan Heeger, Alan MacDiarmid, and Hideki Shirakawa discovered that plastics can conduct electricity on specific arrangements of its atoms. Their study on conductive polymers had earned them a Nobel Prize for Chemistry in 2000.

Ms. Jeffries-EL received a five-year $486,250-faculty early career development grant from The National Science Foundation for her research on the polymers. She had also received support from the Iowa Power Fund for application of organic semiconductor technology on solar cells.

But its application on solar technology may face challenges as polymer-based solar cells have been found to produce low energy conversion rates due to structural issues.