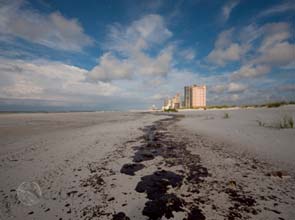 The Bureau of Ocean Energy Management, Regulation and Enforcement, an agency under the Interior, issued a permit to Houston-based company Noble Energy to drill a bypass well in 6,500 feet of water in an area 70 miles southeast of Venice, Louisiana.

“This permit was issued for one simple reason: the operator successfully demonstrated that it can drill its deepwater well safely and that it is capable of containing a subsea blowout if it were to occur,” said bureau director Michael R. Bromwich in a statement.

“We expect further deepwater permits to be approved in coming weeks and months based on the same process that led to the approval of this permit,” he said.

The permit comes days before Interior Secretary Ken Salazar is set to defend the agency’s 2012 budget request on Capitol Hill, where the Republican House of Representatives has promised to grill Interior officials about the permitting delays at several hearings over the next few weeks.

In addition to the drilling permit, the Interior Department also approved 37 permits for new wells in shallow waters.

Mr. Bromwich is placing confidence in Noble Energy, saying the company has contracted Helix Energy Solutions Group to use its capping stack to stop the flow of oil should a well control event occur. Helix was the same company that played a key role in the BP Macondo spill response.

Initial drilling of the Noble well began in April of last year but the activities were halted due to the Interior Department’s declaration of a moratorium on deepwater drilling two months later, as a response to the Gulf fiasco. The spill dumped over 4 million barrels of oil into the Gulf over several months last year.

The agency’s announcement comes from the courts and Congress’ demands for the Interior Department to hasten approval of deepwater drilling projects.

In mid-February, U.S. District Judge Martin Feldman in Louisiana ruled that the Interior had to act on drilling applications «within a reasonable time» and that delays had grown «increasingly inexcusable.»

Politicians welcomed this development, saying the move stokes optimism in local oil and gas exploration, but that the Interior Department should also step up on approving permits to ensure industry growth.

«This is a good first step,» said Louisiana Gov. Bobby Jindal, «but we must quickly get to a level of issuing permits that represents a critical mass so thousands of oil and gas industry workers can get back to work fueling America again.»

“There are concerns of $4 per gallon gasoline in the near future, and while one deepwater permit is a start, it is by no means reason to celebrate. I’m still demanding that the Obama administration allow at least 15 deepwater drilling permits,” Louisiana Senator David Vitter said.

“The Interior Department has destroyed jobs in Louisiana, has contributed to the bankruptcy of at least one major employer and is breaching contracts with other employers while potentially putting taxpayers on the hook for billions of dollars,” he added.