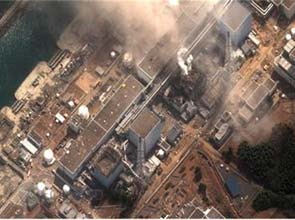 Many of the world’s 442 nuclear power reactors are by the sea, rather than by lakes or rivers, to ensure vast water supplies for cooling fuel rods in emergencies like that at the Fukushima plant on Japan’s east coast.

«It’s quite a conundrum,» said Ian Jackson, a nuclear energy fellow at Chatham House in Britain. «If you are in a geologically stable area, a coastal location is still the best option.»

Japan was scrambling to avert a meltdown at the Fukushima plant after Friday’s devastating quake and tsunami, which killed at least 10,000 people.

Inland, water supplies can be more vulnerable to heatwaves, floods, temperature swings and dam failures. Water is a prime consideration in siting decisions that include staying clear of geological fault lines, flight paths and cities.

A 2003 heatwave in Europe, for instance, forced Electricite de France to close or lower output at about half its 19 nuclear plants because of temperature limits on the water it returns to rivers such as the Rhone.

Excessively high temperatures can kill fish and other river life, as well as reduce output from the power plants.

«If climate impacts include flood, heatwaves and droughts then you can expect that nuclear plants will have to shut down more often,» said Rianne Teule, a nuclear expert with the environmental group Greenpeace in South Africa.

«It will bring more risks,» she said. Greenpeace favors a phase-out of all nuclear power.

A study in the journal Nature found that it was very likely that global warming, stoked by human emissions of greenhouse gases, had contributed to the extreme temperatures of the 2003 European heatwave and hence the severity of its impact.

Rising sea levels are also a long-term consideration for siting power plants that will operate for decades. Higher sea levels would aggravate storm surges or the impact of tsunamis.

The U.N. panel of scientists said in 2007 that the sea level is likely to rise by between 18 and 59 centimeters (7 and 24 inches) this century, more if there is a big thaw in Greenland and/or Antarctica.

«Deciding where to site a plant is tricky,» said Nils Boehmer, a nuclear physicist at the environmental group Bellona in Norway.

Placing plants inland often exposes them to the risk of higher water temperatures in summer, reducing generating capacity. «Then you end up that the best place is on the coast where there is a risk of a tsunami,» he said.

An added consideration is that environmental rules are getting tougher in many nations.

Last year, Exelon Corp. said it would shut its Oyster Creek nuclear power plant in New Jersey in 2019, about 10 years before its license expires, as part of an agreement to let it keep operating without expensive cooling towers.

New Jersey had wanted Exelon to install a new cooling system at the plant, the oldest reactor operating in the United States, to reduce the threat to fish and other life.