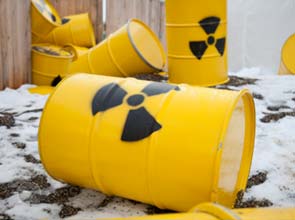 Fallout from the 1945 United States bombings of Hiroshima and Nagasaki and nuclear tests, along with accidents such as at Chernobyl in 1986, have spread a pervasive background of radiation around the globe.

«We expect that maybe in seven days from now we could detect some atoms, with very, very exact instruments here in Sweden,» Klas Idehaag, reactor inspector at the Swedish Radiation Safety Authority, said on Friday.

«But it will be no effect on the environment or for people,» he said.

Low-level leaks of radiation from the Fukushima plant in Japan, crippled by an earthquake and tsunami a week ago, have been detected on the U.S. west coast after crossing the Pacific, diplomatic sources said in Vienna on Friday.

Background radiation means that low-radiation steel made before 1945 is favored for uses such as in sensitive medical equipment or geiger counters. Steel made since 1945 absorbs extra radiation from the atmosphere during production.

Major sources of old steel have included the German fleet scuppered off Scotland in 1919 after World War One.

«It has had a number of applications, including in measuring minute amounts of radiation,» said Jude Callister, custodian of the Scapa Flow Visitor Center and Museum in Scotland. After 1945 «the German steel acquired a premium.»

In June 1919, the German naval commander ordered the scuppering of the interned High Seas Fleet to avoid capture by the British after World War One. Most of the 74 ships sank.

On Thursday, President Barack Obama said that he did not expect harmful levels of radiation to reach the United States from Japan. U.S. fear about the leak has pushed up demand online for potassium iodide antidotes and Geiger counters.

A major accident at the reactors, where workers are trying to cool crippled reactors, could spew dangerous radioactivity in Japan but is unlikely to end up as a global threat.

«We believe it won’t have any health consequences for any countries except for Japan,» said Ole Reistad of the Norwegian Radiation Protection Authority.

The International Atomic Energy Agency says that people also pick up radiation from sources such as x-rays, cancer therapy and from natural sources such as rocks containing thorium or uranium. Many homes have detectible amounts of radon.