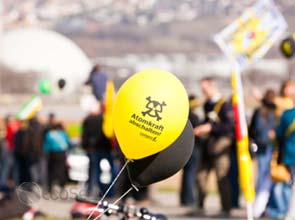 «A decision has been taken to shut down eight plants before the end of this year and they definitely won’t be reactivated. And the remaining nine will be shut down by the end of the decade,» Juergen Becker told Reuters on Monday.

«Japan has shown that even if there is a miniscule occurrence, the residual risk is too high to justify the continuation of nuclear power … It is better to go for other energy services in a civilized country,» he said.

A phase out could cost the four big utility companies RWE, E.ON, EnBW, and Vattenfall hundreds of millions of euros in lost profits every year.

Becker, one of the three deputy ministers, was speaking on the sidelines of a meeting of the International Renewable Energy Agency in the United Arab Emirates.

Chancellor Angela Merkel has repeatedly emphasized that no decision has been made since her cabinet intends to analyze the reports of two separate government-appointed commissions, one of which held its first meeting on Monday in the Chancellery.

«All of these issues (resulting from a possible nuclear power phase out) should be discussed, weighted, and quantified,» Ms. Merkel said on Monday before the meeting.

The «Ethics Commission for a Secure Energy Supply» under the leadership of former environment minister Klaus Toepfer and the president of the German Research Foundation DFG, Matthias Kleiner, is expected to present its findings at the end of May.

In an interview with the Financial Times Deutschland published on Monday, Mr. Kleiner warned it made little sense to shut down nuclear facilities in Germany only to then pay to import atomic energy from abroad.

«To only talk about an exit from nuclear energy is too simple,» he said, adding the commission’s mandate encompassed a long-term concept for a secure power supply.

«In the end we need to arrive at a national energy strategy that serves as a guideline for the coming decades and will be accepted by society as a whole,» he told the business daily.

According to Germany’s BDEW industry association, the country has been importing on balance 50 gigawatt hours a day of power ever since the March 17 order by the government to shutter reactors amounting to a combined 7,000 megawatts of capacity.

Prior to this, a scenario typical of March had been in place, involving net exports of 70 to 150 GWh a day.