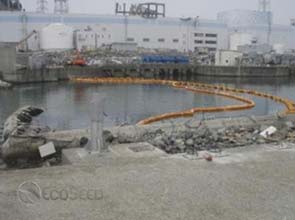 Kyodo said the government’s Nuclear Safety Commission has estimated the amount of radioactive material released from the reactors in Fukushima, northern Japan, reached a maximum of 10,000 terabequerels per hour at one point for several hours, which would classify the incident as a major accident according to the I.N.E.S. scale.

The scale, short for International Nuclear and Radiological Event Scale, is published by the International Atomic Energy Agency and ranks nuclear and radiological accidents and incidents by their severity from 1 to a maximum of 7.

Japan had previously assessed the accident at reactors operated by Tokyo Electric Power Co, which engineers are still trying to bring under control, at level 5, the same level as the Three Mile Island accident in 1979.

On March 11 a 9.0 magnitude earthquake and a massive tsunami triggered the nuclear disaster where reactors at the Fukushima Daiichi complex were crippled due to a loss of power which disabled cooling functions.

A spokesman for the Nuclear and Industrial Safety Agency, Japan’s nuclear safety watchdog, said on Tuesday that the level of the Fukushima incident was still a 5 and that he was unaware of any move by the government to raise the level.