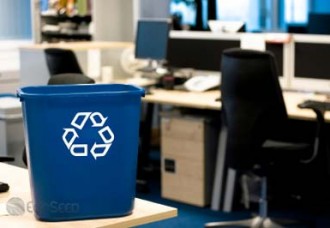 “Recycling is actually the most visible activity that a business can do to really communicate their environmental commitment,” Erik Makinson, a senior manager with the Waste Solutions group of Ecova told EcoSeed.

According to Mr. Makinson, by putting a recycling program in place, a company is able to engage both employees and customers in an activity that is helping the environment.

“It increases their brand value with their customers and it also increases employee pride in the company that their working for,” he said.

It isn’t just a company’s image that can benefit from implementing recycling and waste reduction programs, however, but also the company’s bottom line.

Despite reaching impressive heights in their attempt to reduce and reuse their waste, Alaska Airlines entered 2012 looking for ways in which their recycling efforts could continue to soar.

They contacted Ecova, a total energy and sustainability management company that specializes in helping large businesses to reduce energy and water use as well as waste generation. Ecova believes that by doing so, a company can save money while reducing their environmental impact at the same time.

Mr. Makinson worked on the Ecova and Alaska Airlines partnership. He told EcoSeed that when they had been contacted by the airline in mid to late 2011, Alaska Airlines already had a long-term recycling program in five corporate offices in Seattle.

“It was a unique opportunity for Ecova as here was an opportunity for us to work with a company that was already an environmental leader, with an established program to make that program better,” said Mr. Makinson.

“The Alaska Airlines case study is a great example of when a company does what’s right for the environment in a strategic fashion they can deliver tremendous benefit to their bottom line as well,” said Mr. Makinson.

Effective communication and implementation of ideas

Ecova recommended that Alaska Airlines implement a single-stream waste diversion program through a local nonprofit recycling vendor. Rather than sorting paper, plastics, and other recyclables into separate containers spread throughout the building, each employee got deskside bins for all recyclable materials that were then collected and sorted offsite by the recycling vendor. Single stream bins were also placed in office common areas such as lunch rooms, conference rooms, and hallways.

According to Mr. Makinson, a recycling program also needs a comprehensive communication program to ensure success. Ecova made sure that all employees and even service providers at the Alaska Airlines offices were aware of the recycling parameters.

Educational sessions were held at each site in which employees were taught about the new program and the benefits it would deliver to both the company and the environment. E-mail blasts and strategically placed signage were also part of the plan to ensure that everyone was aware of the program, enabling the improvements to take hold and benefit the company.

“The recycling volume was increased by about 20 percent or the equivalent to filling three 747 passenger planes with material. This reduced their waste expenses, in other words, what their paying today is only 27 percent of what they were paying this time last year,” he said.

Alaska Airlines and Ecova are now seeking to expand the recycling efforts to the remained of the airlines facilities and to find ways to fit other waste, such as Styrofoam, that is not yet part of the single-stream waste diversion program into the program.

Another possible opportunity for expansion of the program would be in organic recycling or food waste composting from the concession areas and restaurants at several of the facilities.