Green is the new organic in wines 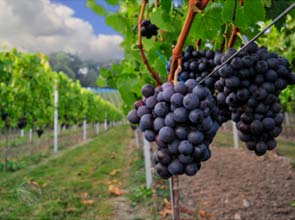 Its easy being green in Mendocino, California, where many of the countys 84 vintners are certified organic, biodynamic or carbon neutral. Tim Thornhill, a transplanted Texan who formed the Mendocino Wine Company six years ago in the county north of San Francisco, is one of them.

Along with his brother, Tom, and former Fetzer Vineyards winemaker Paul Dolan, he bought the Parducci Wine Cellars and revived the wine’s reputation. He also used his background in horticulture to design a wetland area in the middle of the vineyard to reclaim wastewater, which is a byproduct of wine making.

«What I run into constantly are people who say ‘I wish I could be environmental, but I can’t afford to be,'» he said. «And it is always clear to me that they haven’t figured out that being environmental is being efficient. And when you’re efficient, money drops to the bottom line.»

Water is a concern in California, where there is always a shortage. Wineries can produce hundreds of thousands of gallons of wastewater, mostly from the grape-crush, tank and barrel cleaning and bottling operations. Wastewater contains the grapes’ natural sugars that deplete the water’s oxygen.

Mr. Thornhill designed a system of gravity-fed tanks and trickle towers made from old wooden slats that oxygenate the water. The result is a small wetlands area and a pond that ducklings seem to favor.

«When you start seeing life, you know your water is getting clean and you look in here between the beautiful green filaments of algae, the duckweed, the rushes, the insects, the birds we’re seeing. We’ve got life,» he explained.

The water will be used for drip irrigation in the vineyards, to hose down redwood tanks where the wine ages slowly in large lots and it will be reclaimed to start the cycle all over.

Unlike Thornhill’s vineyards, Chiarito Vineyards uses natural rainfall and runoff for its much smaller production.

«This is dry farmed. There is no drip irrigation. There’s no nothing. They are totally dependent on the spring rains and the runoff from the mountains,» John Chiarito said.

As a result, the vines send their roots down into the volcanic ash that lies under a topsoil of river deposits and sandstone. With a yield of less than three tons of grapes per acre, Mr. Chiarito estimated he makes about 800 cases of Zinfandel and Nero d’Avola.

It all started 20 years ago when he bought an abandoned walnut orchard and planted Zinfandel vines in «the old style, eight by eight foot spacing, head-trained. No wires.»

Mr. Chiarito farms organically, but his wine is not certified because he said it involves too much paperwork.

Last week the United States Alcohol and Tobacco Tax and Trade Bureau and the Department of Agriculture issued new rules to clarify what wineries must do to use the word organic on their labels.

The same week the European Commission withdrew its proposal to have a wine classified as organic, saying it was unwilling to compromise on organic standards.

In addition to wine, Mr. Chiarito also makes his own prosciutto.

«I’ve been making prosciutto for about 25 years. I guess I’m a bit of a throw back,» he said, which may explain his passion for doing everything by hand.