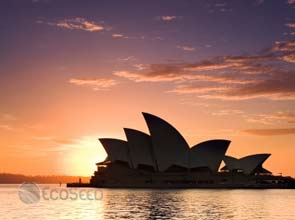 By espousing the right policies, the country could cut its emissions by 25 percent by 2020, the conference heard. A price on carbon was a key component, but by no means the only one.

«The Australian economy is only about 10 percent efficient – this means that 90 percent of the energy in the fuel we dig up is lost in the supply chain and end uses,» Mr. Jutsen told business leaders in a message just nine days from a national election.

Climate change has been a major issue and the government has been pressed by power generators to put a price on carbon to give certainty to long-term investment plans.

Wealthy inner-city voters have also urged tougher climate policies in a nation that faces major costs from rising seas, the impacts of more extreme weather on crops and hotter bushfires.

Heavily reliant on cheap coal for power generation, the country ranks among the developed world’s top per-capita emitters of carbon.

Energy efficiency programs, wind, solar and other green power, as well as greener buildings and cars can all cut emissions with the right policy incentives, the delegates heard.

A survey of 82 conference participants, from mining to manufacturing representatives from Australia and New Zealand, showed 20 percent favored government incentives as the way to cut emissions, while 19 percent chose regulations. Seventeen percent backed a price on carbon via a cap-and-trade scheme.

Mr. Jutsen said a number of firms were already on track to achieve reductions of up to half, such as retail giant Woolworths Ltd., with energy efficiency programs being the primary source as well as switching to renewable energy sources. «What they (Woolworths) are saying is they will have a zero increase in their emissions footprint while they will double the physical footprint of their organization,» said Mr. Jutsen.

«The carbon price is seen by the supply-side as essential to make rational investment choices but from the demand side it is quite clear that a much more complex set of measures is needed to achieve reduction,» he added.

«With the right policy mix Australia could achieve a 25 percent reduction in emissions from 2000,» John Thwaites, chairman of ClimateWorks Australia told the conference.

He said each industry sector had different opportunities and barriers to lowering emissions which meant federal, state and local governments needed to tailor policies to sectors to best attain meaningful cuts.