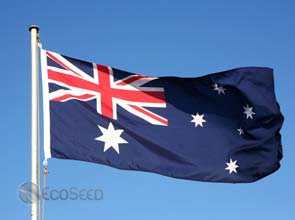 The Australian Capital Territory, which includes the capital Canberra also ruled by Labor, said its Climate Change and Greenhouse Gas Reduction Bill 2010 would set a target of cutting carbon emissions by 40 percent by 2020 from 1990 levels.

Last week’s national election left neither Labor nor the rival Liberal and National coalition with the 76 seats in the 150-seat lower house of parliament needed to claim victory.

Both parties are wooing four independents and the Greens to try to form a minority government.

«Governments have a responsibility to act on this issue,» said the A.C.T.’s minister for the environment climate change and water, Simon Corbell.

Mr. Corbell said the aim was to cut planet-warming carbon emissions by boosting renewable energy and increasing energy efficiency in homes and businesses.

The bill establishes an independent climate change council and encourages the private sector to undertake voluntary agreements with the government.

Labor and the Liberals both back a 5 percent cut in emissions by 2020 on 2000 levels and Labor aimed to achieve this largely through an emissions trading scheme, with a higher target if the world agrees to a tougher climate pact.

But fierce opposition and two rejections of the laws by a hostile Senate led Labor to shelve the legislation in April, a step that angered many voters but boosted the popularity of the Greens because of their stronger climate policies.