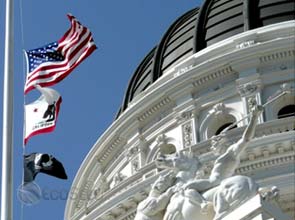 The United States has suffered from price hikes over the past 30 years when crude oil prices rose by an average of 179 percent in one year.

A 55-page report, written by economists from Energy Independence Now, the Center for Resource Solutions and the Environmental Defense Fund, analyzes how much more a consumer would pay if wholesale crude oil and natural gas prices doubled in 2020.

The study considers scenarios for moderate and large price shocks. It calculates substantial savings brought by a decline in the demand and dependence on imported oil and natural gas through effective clean energy and clean air standards adopted by the California Air Resources Board.

The study aims to counter a November ballot for Proposition 23, which would delay the implementation of the Global Warming Solutions Act of 2006 or Assembly Bill 32. The bill intends to reduce California’s greenhouse gas emissions by roughly 25 percent based on 1990 levels by 2020.

The California Air Resources Board, under the California Environmental Protection Agency, will prepare plans to achieve the objectives stated in the bill.

A suite of standards that support more efficient cars, greater alternative fuel options, more renewable energy and energy efficient neighborhoods will result in savings of up to $4.8 billion if a moderate price shock occurs in 2020 and as much as $9.6 billion if a large oil price shock happens, the report states. This will translate into savings of as much as $670 per household.

«This study uncovers massive potential savings, and shows how the state’s landmark policy will protect California’s economy from unpredictable events, such as hurricanes and wars, that cause energy prices to jump.» said James Fine, economist for the Environmental Defense Fund and one of the report’s authors.

Controversy over the proposition has been raging for months. One hundred-eighteen economists from Stanford University; the University of California at Berkeley, Los Angeles, San Diego, Santa Barbara, Riverside; and the University of Southern California, signed an open letter on July 19 warning that any delay in implementing the global warming bill will be more costly.

Critics argued that while the law promotes solar, wind and alternative fuels to replace oil, gas and oil, it will increase the price of energy and burden both customers and businesses in California.

The A.B. 32 Implementation Group enumerated studies that reportedly reveal the true costs of the implementation of the law. The Southern California Public Power Authority, for example, estimated that passing the bill could lead to up to a 60 percent increase in electricity bills for some ratepayers.

Even the United States Environmental Protection Agency concluded that the bill would result in annual reductions of gross domestic product from roughly $1 trillion to more than $2.8 trillion by 2050. California alone will lose $130 billion to $364 billion.

Meanwhile, the Ella Baker Center and the California Environmental Justice Alliance said in a study released in August that Proposition 23 is primarily funded by oil refiners such as Valero Energy Corporation and Tesoro Corporation, which are among the biggest polluters in the state.