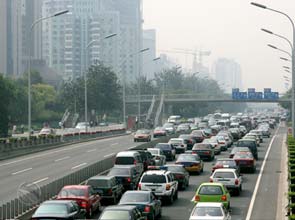 Currently, there are more than 5,000 new hybrid buses on the roads, while electric cars are mainly used for taxi demonstration programs in some cities.

“Electric vehicles have yet to develop the strength to compete with conventional vehicles or serve as a substitute due to technical constraints such as immature battery technology,” the deputy director said.

Meanwhile, according to the Chinese government’s new-energy vehicle development road map for the next ten years, China could see one million E.V.s by 2015 and 10 million by 2020.

Pushing for cleaner transportation in the country, another 10 billion yuan will go to supporting the E.V. auto part industry and 5 billion yuan for construction of infrastructures that support green vehicles in pilot cities. In addition, the government will be reducing the taxes for E.V.s.

Despite efforts to adopt the use of E.V.s in the country, China’s automakers will be faced with the critical issue of choosing between fast charging and battery swapping.

The choice of which one will go mainstream – battery swapping or plug-in charging – is all up to the development of battery technology in the country, said Yang Fang, an analyst at the State Grid Energy Research Institute.

However, the State Grid Corp., China’s largest energy grid company, has previously expressed that it would lean more towards the establishment of more battery-swap stations. Even with this partiality to battery swapping, the corporation has already made plans to build 220,000 charging poles across China from 2011 to 2015.

The move is in anticipation of a projected 500,000 electric vehicles deployment in China’s roads by 2015, as forecast in a study by the National Development and Reform Commission, an economic planning agency.